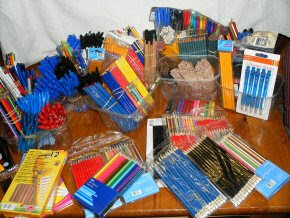 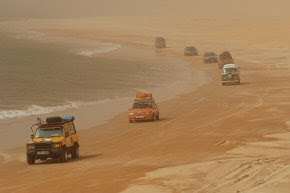 Preparations for the 2008 Plymouth-Banjul Challenge are now under way. This will be the eighth time the Challenge has been run. A total of 132 teams have entered to drive the 3,700 miles from the UK to Banjul the capital of The Gambia, while another 128 teams intend to drive 4,100 miles to Bamako the capital of Mali. The first group of teams start for Bamako on 12 October 2007, the first group for Banjul start on 19 December, and the last groups for both places start on 11 January 2008. Teams are on their own, with no formal assistance, and there are rules governing maximum costs of vehicles and preparation - which are generally ignored. Two rules which must be obeyed are: All vehicles must be left hand drive and all vehicles will be auctioned for the benefit of local Gambian Charities. In 2007, the auctions in Banjul raised £109,000. Read more on the Plymouth-Banjul Challenge website. In past Challenges, a number of teams helped Pageant by raising sponsorship, or by transporting things to Gambian schools and villages. If you are in one of the teams in the 2008 Challenge, and are looking for a good cause to help, then please consider Pageant. If you are thinking of taking essential educational items to The Gambia, then Pageant's agents there can help with getting them to the right place. In return for your help, we can provide you with pages on our website to help with your publicity and fundraising. If you know anyone who is in the 2008 Challenge, then please tell them about Pageant.

Please Contact Pageant for more information.
Also have a look at our web pages for teams who helped us in previous challenges:
2006 Shap Ahoy, Super Trooper, seven other teams who helped Pageant
2007 Ibrakeforcake, Desert Mice & First to the bar, Ice Cold Teams