Yes, today was day 1 of the main reason we are here - to show science teachers how they can use experiments with simple kit to demonstrate the stuff they teach off the board.  For most this is the first time they will have learnt this way.

Following a gracious address from the minister for education (I think he was) (Note from Pippa: not the minister, but the man who has special responsibility for Science Education at the Ministry for Basic and Secondary Education), we split the students into 4 groups of 6 who during the course of the day moved around 4 separate "stations" giving them the chance to try out science in different areas. Today my station was "pressure" (bernouilli effect, pressure = force/area etc.).  The students were very engaged but often understandably awkward around hardware.  At the end of the day 8 students demonstrated to everyone else one simple experiment - great fun but a big learning experience. 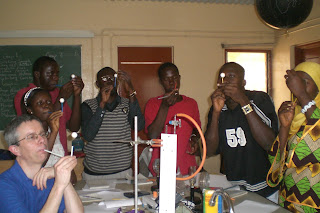 Yusupha (our sponsored student) joined us today too which was great.

On the way back from the simple restaurant tonight one of the local youths was trying to persuade the ladies to walk on the beach with them tomorrow.  He was surprised to be told this would be impossible as we are leaving for work at 7.15 tomorrow morning. Fab...

Bit of a dicey start to the day. Had to seriously ask if I was going to make it to the college about 50 minutes away - but imodium is wonderful stuff.

A successful final set up of our science stations until heading to the airport to meet Joe and Sheila. Very pleased to see them both and the extra science kit they brought (not saying which the more exciting).

Turning in early. I'm in a sweatshirt everyone else is the short sleeve shirts.My thermostat is not on top form.

For Ian and I leisurely start to the day as we were visiting students at local schools. Pippa and Anne, however were visiting schools on the north bank meaning they left around 6.30.  They are still not back yet.

We visited 4 schools, Muslim,Christian and non denominational.  A coffin was brought through the gate of the muslim school while we were there.  I chatted with one student at another school who wants to be an engineer -very bright.  They had been studying the work function of surfaces (how easy it is strip electrons from a material if I remember right). 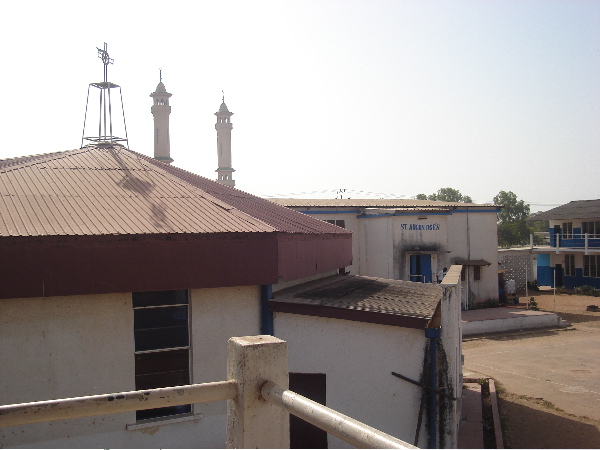 In one school I came across a door marked "Parish Office".  Knocking on the door I met the vicar of the church who was very friendly. It seems the bible study did happen yesterday but they all went to the home of a person who was housebound. Will try again next week since I now know how it works.

In the afternoon I reviewed my science experiments for the workshops.  In consequence I have asked a waiter for some straws (any guesses what experiment this might be?).

Panic over. Looks like we can actually run the planned science workshops.  Without going into detail, all the teaching kit shipped out around Christmas WAS where it was meant to be by the time we arrived at the teaching college this morning. 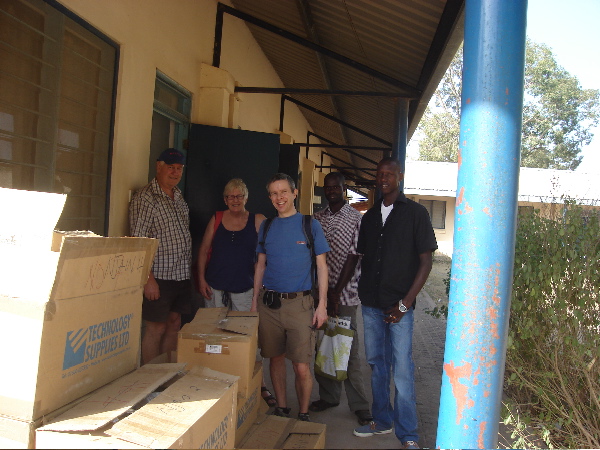 We were allocated one lab to set up, which we swept and wiped down (the Gambia is very dusty) and proceeded to sort the kit into piles for the various topic stations we are running; light, mechanics, waves, magnetism, pressure etc.  This took up to lunch (omelette and bread - v good).
The afternoon we got various experiments running.  Abdoulie and Wandifa built a wire and wooden bars waves demo kit. I repaired the ripple tank (packing insulation tape was a good move).  Pippa played with timing gates, Ian with balances, and Anne was stores control.
Got back in time for a quick drink then walked to the anglican church for what was advertised as a bible study at 6. No one there - still I chatted with one local each way.  One pointed out that people have several wives out there but I said I'd stick with just the one thanks.
This evening we are off to the local rotary club.

Yesterday we visited a centre for supporting those with physical disabilities.  Had a good chat with the wheelchair repair guys. The material they have to work with! 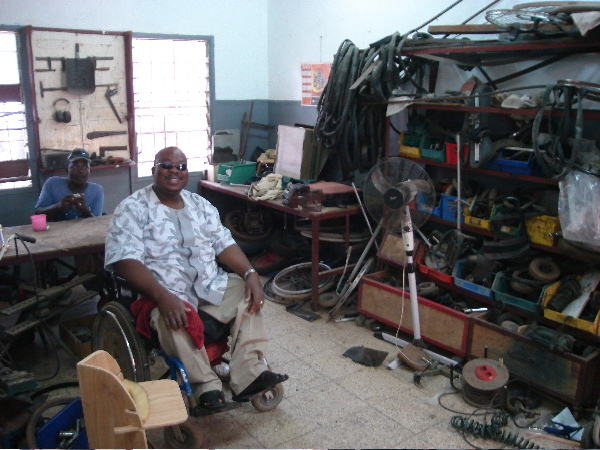 The rest of the day we visited the compounds of several families of sponsored children.  Lots of lovely kids.

Safely arrived without a hitch. Divested myself of shirt and sweatshirt down to my Pageant t-shirt before leaving the plane - I understand the customs people recognise PAGEANT which may come in handy as they have been tricky before.
Walking out the door of the 757 was like hitting a wall of heat.  For a moment I wondered if somehow we were experiencing heat from the engine exhaust, but, no, it was just another typical upper 30s centigrade day in the Gambia. 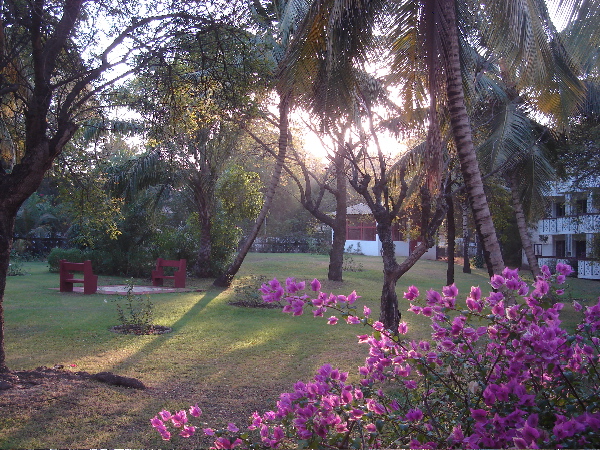 We queued in the mercifully cooler customs hall for 15 minutes or so.
An elegantly dressed Gambian lady weaved through the queuing line of thermally shocked tourists with her bevy of children in tow – a VIP it seems.  A customs official briefly questioned my large box containing a power supply and signal generator (part of our science teaching kit) but was satisfied with my official PAGEANT packing note.  And so we were through to be greeted by Pippa, Ian, Wandifa, Yankuba and Abdoulie.
Now it is evening and we are back at the hotel after a simple meal at a local restaurant.  I had a rather bizarre curry paella, not what I was expecting but perhaps in tune with the climate here.  Anne innocently ordered a pancake for dessert not realising they would spend the next hour finding some flour with which to make it – but the proprietor gave us a lift home by way of apology. This is the Gambia!
Tomorrow we are off to track down a mythical science training centre…
# posted by Chris @ 16:57

Science in the Gambia: Day 0 - all packed?

Off to the Gambia tomorrow to teach Physics!  A scary prospect (for whom you may ask). It's been a bit manic the last few weeks but my checklist is almost all ticked off now.

While my job is quite technical, the extent to which I use the physics I learnt at school or uni is pretty limited
There is big difference between intuitively understanding how a phenomenon like diffraction works and explaining it to someone else.  So I've been doing quite a lot of preparation which has been grounded in the excellent material developed by Joe B from Collyers who I'm glad to say will be with us.

We will be working with Gambian teachers rather than pupils largely.  The plan is to focus on experiment and show how this can be used to explain the physical phenomena which are generally only taught off the blackboard in the Gambia.  A common misconception of science is the laws (e.g. Newton's Laws of motion) define how reality behaves.  Of course it is in fact the complete opposite; a "law" is merely a model of reality. When a model fails, as Newton's does at high velocities, then it needs modification - bring on Einstein.  We are hoping that starting from experiment will challenge such an understanding.

Apart from never having taught physics, I've also never done so at temperatures approaching 40C. Should have spent last week in the environmental chamber at work conditioning myself....

Microloans are very small amounts of money lent to poor people who would not otherwise be able to borrow. Microfinance schemes started in Bengladesh and India in the 1970s. Their original intention was to encourage entrepreneurship, so that disadvantaged people could start their own small businesses. For in-depth information about microfinance, please see this excellent article The Promise of Microfinance for Poverty Relief in the Developing World

A news item in the Guardian newspaper (UK) on 1 February 2011 describes how things have changed for the worse in India since those early days [read the article]. Commercial firms, driven solely by profit, are now involved in microfinance. Interest rates charged are typically from 25% to 40%. Borrowers are taking microloans to buy consumer goods or even food. Poor people find themselves with debts they have no hope of repaying and interest they cannot afford. They are harassed by aggressive debt collectors, and some have been driven to suicide.

Despite this disturbing news, there are many microfinance schemes which still adhere to their original principles, particularly those promoted by charities and NGOs. Pageant's Loan Scheme in The Gambia is designed to avoid all of these problems by giving control to the local community.
Pageant currently has three schemes working in The Gambia. The first at Sika is now operating with its twelfth group of women. Read more about Pageant's Loans on this page of the Pageant website.