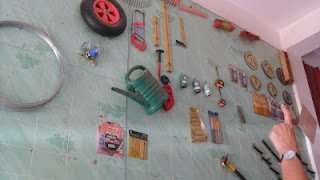 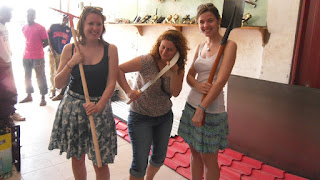 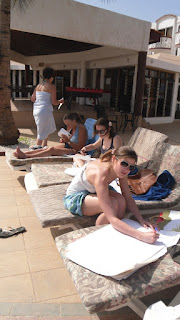 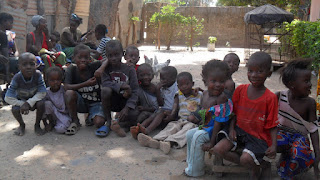 Introducing the PAEGANT team for April 2012... Pippa, Tina, Frances, Rachel 'Page' and Rachel! We have lots planned for the next two weeks including school art and PE sessions, compound visits, a trip up-country, market trips, and catching up with lots of sponsored children, friends and of course, the fantastic PAGEANT team.
Day 1
Greetings from The Gambia!!

Today, we were up exceptionally early to catch our flight from Gatwick. We had a good flight and were greeted at the airport by Wandifa, Abdoulie, Linda and Wandifa's beautiful children. On our way to the hotel we stopped off at Linda's to pick up some PAGEANT boxes, before enjoying a swim, cocktail and dinner by the pool. An early night was called for after a very long but great start to the trip!

Day 2
After breakfast we started the day by drawing and cutting out animal pictures from the children's book 'Rumble in the Jungle' ready for our arty trip to Humanity Nursery School on Monday. Next it was time for garden tool shopping! These had been purchased through the PAGEANT Gift Token scheme so we set off in search for a spade, rake, and 'cutter' (aka machette). After testing several of these we decided on our set, settled up and then headed to visit Abdoulie Touray and his family. Abdoulie is a fantastic gardener and has maintained his artemesia plants given by PAGEANT which, even after two years, are still doing a wonderful job of curing malaria sufferers in his community. We were treated to a delicious lunch of pine nut spicy domada which we enjoyed in the shade of a large mango tree. Our final stop of the day was to visit Samboujang, a boy sponsored by PAGEANT, who at birth was born with feet that faced the wrong way. After his operation many years ago, his feet are still doing well and he enjoys playing football with his friends. There were lots of very excited children at his compound who very much enjoyed having their photos taken! We are off to meet Linda and some older sponsored children for dinner tonight, in the restaurant where Sainey's brother Musa works. Looking forward to some yummy food and a relaxing evening.

Love to everyone at home. Hope you like the pictures!
Frankie, Page and Rachel x x
# posted by *frances* @ 19:39

A recent visit to Marlborough, United Kingdom, by a group of six young
people from Gunjur will go a long way in enhancing cultural
understanding and developmental cooperation between the two
communities, according to the public relations officer of the
Gunjur-Marlborough Link, Mariama Mbanding Darboe.

Speaking in an interview with The Standard, Ms Darboe said the link
has brought about numerous projects that have helped the people of
Gunjur to attain substantial milestones in education, health and
women's empowerment.

“One of the first projects embarked upon by the link in 1985 was the
construction of a five-classroom block at Gunjur Primary School which
thousands of pupils have gone through. We have also built a pre-school
to provide early education for the children of Gunjur, complimenting
government's efforts. We have also established women's gardens that
provide a source of livelihood for over 400 women”.

Another important contribution towards the empowerment of Gunjur
women, according to Ms Darboe, was the acquisition a milling machine
which “will help women save a lot of time by using the machine at a
reasonable cost rather than the time- consuming use of mortar and
pestle. This will also help women attain food self-sufficiency and
provide the nutritional needs of their children thereby improving
their health.”

The president of the Marlborough Brandt Group, Dr Nick Maurice,
described the link as a “remarkable experiment in human relations”
that has brought immense benefits for the people of the two
communities.
Dr Morris, who has visited The Gambia over forty times since 1982,
said the exchange visit programme has made the people of the two
communities “better people” by learning each other's cultures and
cooperating for development.

“I believe the developed world has a lot to learn from the developing
world and together we can work together to create a better world. We
bring young people here to stay with the local families to learn their
culture and way of life and they go back richer for the experience.”

The participation of young people in the link, Dr Maurice pointed out,
is essential for its continued success.
“I believe the Gunjur-Marlborough Link will continue to grow from
strength to strength because we have more similarities than
differences. The people of Gunjur and Marlborough are proud of this
remarkable partnership for peace and development.”