Will 2015 be the beginning of the end of FGM in The Gambia?

A new country profile report on the practice of Female Genital Mutilation (FGM) has hailed the ‘positive stories coming out of The Gambia’ while urging the government to make renewed efforts to end the practice. The report titled ‘28 Too Many (2015) Country Profile: FGM in The Gambia’, revealed: “The movement to end FGM is gathering pace. Initiatives such as The Girl Generation (a global campaign funded by the UK Department for International Development (DFID) to support the African-led movement to end FGM) are helping to ensure that the girls of today will be the first generation whose daughters will not be cut. There are positive stories coming out of The Gambia which give hope that The Gambia will reach the point where FGM will no longer be practised. Late last year in The Gambia the first Youth Summit was held, after which Amie Bojang-Sissoko said ‘At one point I felt we were losing our activism, but now I feel it has been re-energised'.

Encouraging stories from The Gambia are set against a global scene where in excess of 125 million women and girls alive today have experienced FGM in Africa and the Middle East, and 30 million more will be affected by 2025 – one girl being cut every ten seconds. While FGM is practised primarily in 28 African countries clustered from West Africa to Egypt and the Horn, it is also found in parts of Asia and across the world among diaspora groups who bring traditions with them on migration.  FGM has no health benefits, yet has serious, immediate and long-term physical and psychological health consequences, which can be severe, including post-traumatic stress disorder, depression, anxiety and reduced desire or sexual satisfaction. Babies born to women who have experienced FGM suffer higher rates of neonatal death, and mothers can experience obstetric complications and fistula. In The Gambia, there is strong in-country evidence of medical complications caused directly by FGM.

Globally, reasons for FGM are highly varied between ethnic groups and communities; it is a deeply embedded social practice associated with adulthood, marriage ability, purity and sexual control.” The report added: “The Government holds an ambiguous position on ending FGM. Though several actions have blocked aspects of NGO programming, the government is working with the UNJP towards abandonment. The United Nations High Commissioner for Refugees (UNHCR) noted in January 2015 that ‘The Gambia was careful about legislating against the practice of female genital mutilation because this would drive the practitioners underground and it had in place a national plan of action against female genital mutilation’. This may be one reason why there is no law. However, it is also known that as long as religious leaders are opposed to ending FGM, the government will continue to be cautious on the issue.

Despite the achievements registered towards ending the practice, the report acknowledged it will still take time for attitudes to change, adding: “FGM will not be stopped in The Gambia by the end of 2015, though it is nonetheless encouraging that the MDGs have ensured a persistent focus on areas related to FGM. The post-2015 agenda will undoubtedly provide renewed efforts to improve women’s lives. Additionally, the African Union’s declaration of the years from 2010 to 2020 to be the decade for African women will certainly assist in promoting gender equality and the eradication of all forms of gender-based violence in The Gambia”. 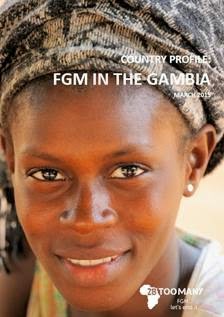 28 Too Many is an anti-female genital mutilation (FGM) charity, created to end FGM in the 28 African countries where it is practised and in other countries across the world where members of those communities have migrated. Founded in 2010, and registered as a charity in 2012, 28 Too Many aims to provide a strategic framework where knowledge and strategies enable in-country anti-FGM campaigners and organizations to be successful and make a sustainable change to end FGM. It is building an information base including the provision of detailed country profiles for each country practising FGM in Africa and the diaspora. You can read the full report on http://www.28toomany.org/media/file/profile/Gambia_v5_high.pdf