An early start today as we were visiting Gunjurs new nursery school which had only been running since November. The people to take us there were the twins Alhassan and Sainey because the nursery had opened up just down the road from where their family's compound was. After meeting and greeting the twins' lovely family, we had a very musical welcome at Gunjur's nursery. We all joined in helping some of the children paint and then had a meeting with the headmaster, the proprietor and the founder of the school, all three of whom gave very forward thinking speeches which showed a lot if insight into ways to improve the school.

Musa, the twins' elder brother who is a qualified chef, cooked us all a traditional meal of rice, fish and peanut sauce which was delicious. We then exchanged gifts with the family who were some of the nicest and most friendly people I have ever met in The Gambia.

A long hot day was ended by a relaxing meal in the restaurant.

Today was a great day for us as we got to meet all of our sponsored children. For the Groves family we met Fatou, Mo Lamin, Lamin and Ebrima, who is sponsored by my granddad. Anne also met the girl she sponsors who is called Binta. Yankuba organised the whole day wonderfully and we all went to the market where the kids bought gifts with the money we gave them. Then we had a lovely lunch at Billy's and went up The Arch for the first time. For those of you who haven't been to The Gambia, The Arch (which probably has a proper name) is the tallest building in The Gambia. A lot of the kids had never been up it so it was a great experience for them too. It took all of our energy to stop Ian Talibo and Mo Lamin falling over the railing, so keen were they to see down.

This evening, we went to the buffet at the Indian restaurant in the main touristy bit of the Gambia, which served very nice food.

Today we visited the tourist attractions in the while Pippa and Ian visited children in their compounds. The crocodile pool was even better than the guide books said. First we were taken around a very informative museum and then, as we were walking along a path through woodland, we came across live crocodiles lying in the shade. It took some convincing but we all touched, or in my case shook hands with, a crocodile.

Next we went onto the monkey park and fed them peanuts. One kind of monkey was very tame and would take it straight from your hand but we were lucky enough to see a much shyer monkey in the distance which was larger and orange. To refresh ourselves, we went to Lamin Lodge for a drink. Anne turned her back for a second and a monkey stole her drink. If it was any consolation, the monkey appeared to enjoy Anne's drink immensely.

We finished the evening off at Nefertiti's with Lindsey.

A very early start but a good trip through security and customs. Possibly the most uncomfortable plane trip I've ever had. At Banjul airport, we skipped straight to the head of the queue as Dad had brought his crutches. While we were waiting for the vans to be packed up with all the bags, a tiny Gambian man came along and tried to clamp the van. However, he was soon sent on his way by our many helpers. A restful afternoon at the hotel finished the day off.

The group was greeted with songs of welcome !!!!!! welcome!!!!!! accompanied with clapping by the mothers of the kids attending the nursery school, and some onlookers who converged there to enjoy the Kora entertainment by a local based kora group led by Jally Madi Suso (a well known kora player, who is used by many locals for entertainment during ceremonies).

The group also had a meeting with the mother's club of the school. Speaking at the meeting, Ahmed Manjang the proprietor of the school, thanked Pageant for providing them with furniture and other learning materials, without which the kids would have been wandering in the street doing nothing.

The visit to the school wrapped up with a dance by the group. One dance that obviously caught many people's eyes and sent them laughing their hearts out was Ian's. 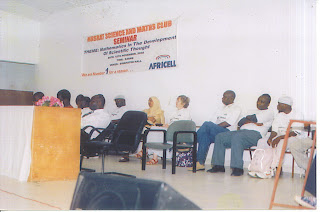 Declaring the seminar open, the head of science department, K. Addai, urged students to strive for excellence in Maths and Science, as they are very important for National Development.

The seminar was also attended by the Deputy Director of Basic and Secondary Education, Badou Joof, who spoke on the theme. He dwelt on the life-changing impacts of Maths and science. Critical thinking, analysis, experiments and scepticism, he said, are very essential in the development of scientific thought.

Nusrat school administration has embarked on a series of measures to stimulate interest in Maths and Science and this has been immensely boosted with the donation of laboratory materials by Pageant.

Hallo from Scotland,
I have been back in Scotland for four weeks now after teaching in Nusrat High School, Serrekunda. I had a wonderful time there teaching English language to grades 10,11 and 12. It was very different from here, classes of 60 or 68 compared to 24 to 30 . Teachers going to the students' classes rather than them coming to us and shortages of materials and equipment. Only two female teachers in the entire school while here ladies are in the majority. No tea or coffee available in the staffroom. Also different was the attitude, behaviour and standard of achievement of pupils. All better in Nusrat. I was very impressed and it made my time in a new culture and environment a pleasant one.
I hope all my students and individuals I met like the two Sambous, Bakari, Yuba and Sainey and his brother, Fatou and Isatou are all doing well.
Hello too to all staff . You were a great bunch.
It's snowing here, no sign of the sun. Mrs Davis
# posted by Mrs Davis @ 22:38