We have now raised £220 in just 5 days to help us replace some of the goats stolen from a poor Gambian family. So we have decided to try and raise sufficient money to replace all 7 goats, and also to build a secure enclosure. Please help us to reach our new target of £450. You can donate online or send a cheque by post - see the details on this web page. 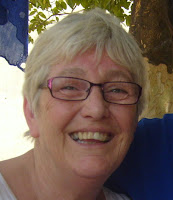 Pippa Howard has just returned from her latest visit to The Gambia. While she was there, she called at the house of a very poor family to collect letters from the children to their sponsors back in the UK. She was very disturbed to find that ALL the goats belonging to the family had been stolen. This was really terrible for them, as they were the only things of value that they possessed. Apparently the thieves had taken 3 goats one night and then the remaining 4 a few nights later. No-one saw or heard anything, so it is extremely unlikely that they will ever get any of the goats back. It is really appalling, and mercifully quite unusual, for anyone to steal from people who have so little in the first place.

The family didn't ask for anything, but Pippa has decided to try and make a make a quick collection of money for them during the next few weeks, so that they can replace at least some of the goats. Pippa will be returning in April so this appeal is urgent. The cost of an adult goat is about 2,000-2,200 dalasis (£44-48). We would like to replace 4 or 5 of them, so we have set a target of £240.

Led my first ever physics class at a sixth form school in the morning. Scary. Pupils are clearly not used to participation so had to work to get them joining in on pendulums and reaction time (led by Pippa). They seemed to find it interesting though judging from their reaction afterwards.
We visited several compounds in the afternoon. We were able to sit under trees during the hottest part of the day which was a great blessing after the roasting day before. Met some lovely children but was a bit manic at times. At another compound children were lower in number and under better discipline and we are were able to play lots of games with them.
And that's about it. Flying home tomorrow. Looking forward to family, friends and a less extreme environment without mosquitoes!
# posted by Chris @ 10:54

Teaching off the board dominates in all subjects – not just in science. Having good spoken English in Gambia is important as it is the common means of communication in a country with perhaps 8 tribal languages, however the standard is often poor. Practising speaking and listening to how you sound greatly helps develop speech. Today Anne and I were dropped off at a lower basic school she has visited before. 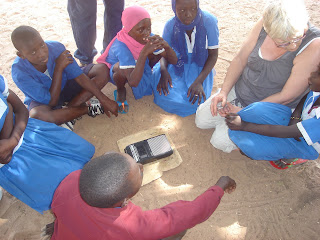 She was kindly allowed to take a class and was able to show a small group how to use a tape recorder creatively to record what they see around them, listen to what they said, and learn how to express themselves. It was also fun which is so key to wanting to learn. The recorder was left with the school with the hope they will use it – we shall see... 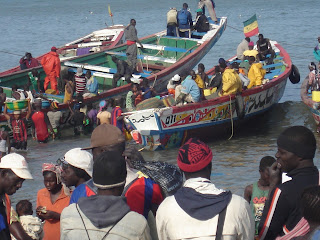 We also visited the fish market on the beach at Tanji - a place of frenetic but organised activity.

A change of tack today plunging into a very well organised lower basic (i.e. primary) school. Pippa lead a session to a class of ~10 year olds on microscopes. Neither Joe nor I had realised we might be teaching science too. We had none of the lovely science kit from the college but hurriedly devised a short class on pendulums; our apparatus stones, a piece of garden string at the bottom of my rucksack, and my phone stopwatch. The class of 45 joined in well.
In the afternoon 5 children came to the hotel to swim and receive gifts from sponsors. We also played football and several local older youngsters joined in and did very well passing to the less able footballers. The children were delightful.
Tomorrow we are of to a village over an hour away on bumpy “roads”. Might be helping Anne teach English! Fab.
# posted by Chris @ 23:02

One of the student teachers,Omar, presented Joe with this kind “Thank you poem” on behalf of the student teachers: We have a deep honour for we receive this marvellous humanitarian gift. PAGEANT, what a true sincere friends you are. Potential partners you are with admirable team of experts.
Gambia is proud of you for your excellent innovative support. We shall nurture this precious gift of talent, skill and knowledge. The Gambia College will celebrate your association in all manners. You make a history in Gambia's education sector. You set a record in our calendar of dialogue.
Thank you the PAGEANT group. 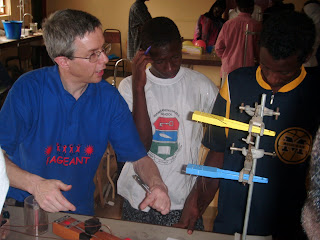 For some reason I woke at 3.30am and once awake I began to mull over ways of demonstrating magnetism, my topic for the day, to my class. Came up with the idea of clamping two bar magnets in mid air and sticking steel pins to them. The pins should align with the magnetic field direction. (Note from Pippa - I thought I would insert the photo of Chris's set-up - it worked really well!)

Never did get back to sleep but was in good time for breakfast.
Our last day of physics workshops went well but you all were very tired by the end. There were short speeches from a college rep and the minister. The highlight was an improvised drama from the students showing how not to teach (all from the blackboard) and how to teach better (using experiment). Very funny. The college was very helpful to us during our three days and the student teachers and teachers got stuck in with enthusiasm. Our hope is that something of the approach will stick and we will begin to see science teaching become more accessible and dynamic.
# posted by Chris @ 16:21