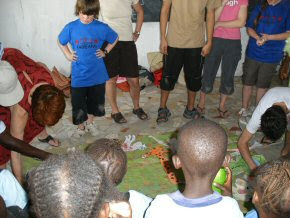 In February, Pageant members visited Kings Kid Academy and KMJ Nursery in The Gambia. They took rolls of brown paper, paints, sponges, brushes, scissors, colouring pens and pencils. They helped the KKA children create a jungle with a wonderful collection of jungle animals, and at KMJ the children created an ocean, with lots of fabulous sea creatures. The photo shows the KKA children working on their jungle. Both of the works of art were subsequently displayed on the classroom walls at the two schools. Ansumana, the headteacher of KMJ, said he was five years old for the day, and got involved with painting and glueing as well. See more pictures and read the full story