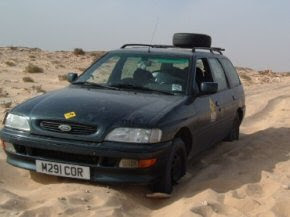 Team Shap Ahoy, Tim Lovatt and Nick Capron, raised £4572 for Pageant by taking part in the 2006 Plymouth-Banjul Challenge, driving from Cumbria to Banjul in a a 1996 Toyota Starlet. This Challenge has now become very popular and vastly over-subscribed, so this year the organisers added the Bamako Run, ending up in the capital of Mali. Shap Ahoy took part in a preliminary expedition to reconnoitre this new route, known as the T4 Challenge. Their car this time was a 1994 Ford Escort Estate. Their route took them across the Channel, through France and Spain, crossing to Tangier, through Morocco and Western Sahara to Nouakchott in Mauritania. Here they headed east to cross into Mali, and visited both Timbuktu and Bamako. Though this was not a fund-raising exercise, they nevertheless donated £250 to Pageant funds. Read their trip dairy.