Back from the bush!! 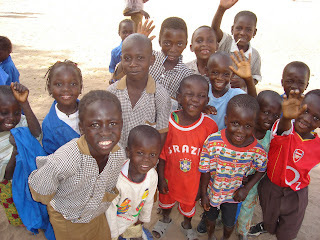 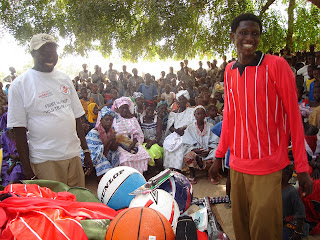 Tuesday 19th Feb
We were up at 5am ready to catch the Banjul ferry across to the north bank. We were really lucky to get on the first ferry as it's done a first come, first served basis as so it was a bit of a squeeze. Accompanying us on our trip were two drivers, Fax and Foday, Wandifa and Yankuba (20) whose home village is Jarreng where we were heading later on our trip.
Our first stop was Bakalarr Basic Cycle School. We were welcomed with a huge breakfast and dancing which we joined in - Pippa has a video which will probably be posted when we're home - arghhh!!!!!! We saw the latest improvements to the school buildings and saw the progress that had been made with the new staff accommodation block.
After a short (!) ceremony we gave out the gifts that we bought for the school. These included a new football strip for the senior team, footballs, badminton sets, skipping ropes, art equipment and science kits. We then visited two of the local Artemesia gardens - a plant which can help to cure malaria. They had been planted in different ways to see which would be the most successful. Once this has been established, cuttings from the plants will be transferred to different villages.
Next we drove to our small guest house in a village called Albraeda - our huts were really nice, however the electricity wasn't working so we had no lights or fans. That evening we visited the village of Sika where Bakary Gitteh, the headmaster of Bakalarr lives and where the PAGEANT loan scheme has been running for several years. We were greeted by more than a hundred people singing and dancing. We sat to watch traditional dancing and eat and didn't arrive back to the guest house until half past one very shattered!!
to be continued...
# posted by CJR @ 19:07