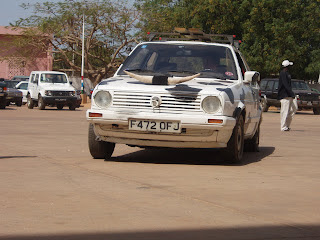 On Sunday we drove to the independence stadium to meet Linda, a Pageant member living in The Gambia, working with the education department. The cars from the Plymouth-Banjul rally were being auctioned there to raise money for two charities - ASSETT (helping small businesses across the country) and the Gambia national Olympic committee (helping Gambian athletes). We were hoping to buy one of the rally cars to use as a Pageant car - the cars were fascinating. One was made to look like a cow with horns, spots and a nose ring; another had no reverse gear and there was even one with no working engine. The one we were bidding for was the red 4x4 driven by the Titans which in the end was sold for an amazing D167,500 - double what we were going to pay. However we were very pleased it sold for so much money. Linda invited us to her house for lunch - we had pizza in her beautiful garden and had a tour of her amazing house. 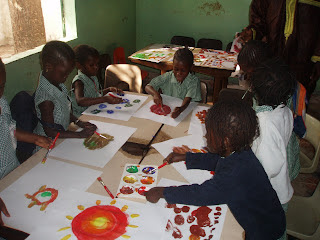 Monday - today was another day doing art and crafts at KMJ. We were with a slightly older class this time (age 5), which included Mohammed Lamin, one of the sponsored children. They coloured in fruit pictures taken from the book "Handa's surprise", painted their own pictures to take home and sponge-painted another palm tree. We sung songs with actions again which the children really enjoyed and understood better than the younger ones. Afterwards we were invited to the namingceremony of a week old baby whose name was to be Mariama. We were pleased to miss the sacrificing of a sheep but got to try some of the traditional food and see the water with local herbs in that were put on the baby's head like a christening. On the way home we stopped at a school in Banjul, Campama Lower Basic, where we will be teaching on Thursday and Friday, to visit asponsored child there. We then returned to the hotel. 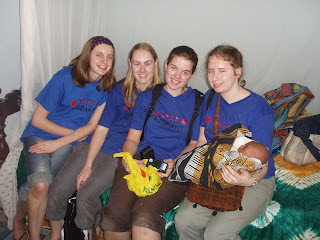