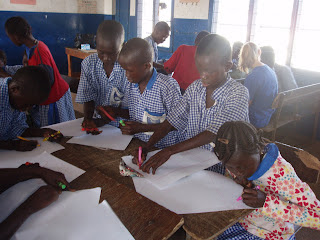 Today we taught at a different school, Campama Lower Basic. We were quite excited at going to the new school and were looking forward to meeting the children (roughly English year 6). Firstly we did some mental arithmetic using maths cards. One side of the card had a question and the other side of the card an answer. A child would say their question on their card and then which ever child had the answer on their card would stand up. It took a while to get the hang of it but by the end they were very good. Although we were surprised to find the boys more encouraged than the girls they all did well when given the chance.
After this they drew their own wax crayon picture, which they loved. We also did symmetrical shapes like we had previously done at KMJ. We played games with them and sang songs including Alice the Camel and the children sang to us as well. In the afternoon we went to visit schools to see children sponsored by Pageant members. We went to Kings Kids Academy where the children greeted us with poems and songs. We also went to the Hotel School, Nusrat Senior Secondary, Rosekali Upper Basic and New Yundum Lower Basic.
Happy Valentine's Day
Love
Rosie, Frances, Lauren and Sarah
xxxxxxxxxxx
# posted by *frances* @ 19:33