On this trip we did not stay at a hotel but were very kindly hosted by Linda in her house at Kotu. We would like to thank her very much for her hospitality.

Friday 11 April
Arrived at Banjul late afternoon to be met by Linda and a taxi. Settled in to her lovely house, went to a local restaurant for supper and then to bed, having caught up on the local news.

Saturday 12 and Sunday 13 April
We met up with Wandifa and visited several compounds and families, being able to spend some time chatting in each one. On Sunday evening we went to visit a couple of houses that Linda had looked at with a view to buying and were able to give her a European perspective! 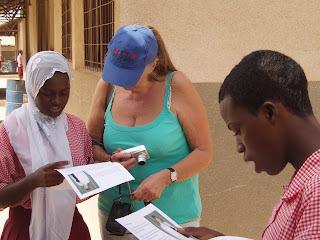 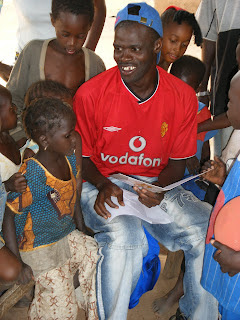 Monday 14 April
We went to meet Ebrima Drammeh from GOWLA at Campama Lower Basic School to start the process of getting a duty waiver for unloading the container that we had packed at Harwell. The container ship, originally expected to dock in Banjul on 12 April, was already two days overdue and was now expected to dock on Wednesday. We then went to the Customs House in search of a declaring agent who was the person we needed for the legalities. Back to Campama many forms were signed, letters were written, money passed over and we agreed to meet again the next morning. We then repaired to The Atlantic Hotel for a well earned drink and were greeted with enthusiasm by all our friends on the staff.
On our way home we called in at a couple of schools to take letters to some sponsored children - they were all very pleased, but surprised to see us as we are not usually in The Gambia in April.
In the evening we met a couple of the further education students, Mary and Lamin, and had a very pleasant supper with them at Luigi's accompanied by Linda, Baboucarr and Joof.

Tuesday 15 April
Owing to a certain lack of water at Kotu we went next door to have a hot shower and hair wash! We then went back to Banjul to meet Ebrima Drammeh and the declaring agent, visited the port and the Gambia Shipping Agency to get more forms signed. We had a quick drink in Banjul with Bakary Gitteh who was visiting the Ministry of Education and then went to tell David Gomez at St. Augustine UBS that he was to receive some furniture off a container that was docking tomorrow! He was very happy. Many further phonecalls were made to other schools to tell them the same news. After another drink at The Atlantic we went back to Linda's and then went with Samba, one of our AAT students, to have supper at Sultan Restaurant where we were served by Alieu, another PAGEANT student. He was extremely efficient and we had a very pleasant evening.

Wednesday 16 April
Pippa went to Brikama in the morning and saw the new nursery school, Jambanjali Nursery School and Kebba - a hotel school student. On the way back we called in on two more students that she had not seen for a long time - both of them had grown enormously tall! Back to collect Tina from Kotu and on to Wellingara to collect Aminata and finally to Wandifa's compound. Here we discussed sewing machines with Aminata (she would like to start a small sewing business and wished to see if Wandifa's wife, Mariama, had the sort of sewing machine she wanted) and gave Wandifa his all singing Manchester United birthday card and a tiny Man U coloured cake! He was very pleased and told us the next morning that he had been playing his card up until 10 o'clock at night!!
That evening we had supper in the local Kotu cafe with Linda, Momodou (from Siffoe), and the Darboe twins Sainey and Alhassan. It was a very enjoyable evening with lots of laughs and Sainey and Alhassan ended up coming back to Linda's to borrow some books to read.

Thursday 17 April CONTAINER UNLOADING DAY
We arrived at Campama at 9am to meet everybody and were in the port by 9.20am. We were told that the container had arrived but where was it?! Search ensued and it was eventually found in a corner of the port. A monster truck was despatched to lift it down and carry it to where the inspection by police, NIA, and customs would take place. It was now about 10.30am. The seal was cut off the container, the door opened and several things removed so that the inspection could take place. We waited about another hour and then the officials arrived. Pippa and Tina chatted to the officials who were very interested and expressed gratitude for our efforts in bringing items for schools to The Gambia. The container passed the inspection and the items were reloaded ready to be transported out of the port. It was now about 11.45am and all was looking good. We were told we only needed two more signatures but we had to go into the centre of Banjul to obtain these. By 4.30pm we had obtained one of the signatures and were still waiting for the second. This was eventually obtained by Wandifa, who accosted the only man in Banjul able to sign, when he came out of his meeting for a comfort break! We rushed back to the port to find that our container had now been loaded up on a lorry ready for transport to Campama - but not yet! We still had to go through the scanning procedure, and eventually collected another FIVE pieces of paper! At last the container was pulled out of the port at three minutes to six in the evening. Just as well, as the port closed for the day at 6pm! We arrived at Campama at 6.20pm where our team of unloaders (who had been waiting since 1.30pm) were ready for us. Unloading started in daylight....... and finished in moonlight at about 9pm! All the headmasters were then responsible for their own materials which were eventually cleared from the school at about 9.40pm. Back to Linda's where she took one look at us and poured us both a large Julbrew! After a pizza and a bottle of red wine we felt a lot better, and so relieved that we had achieved what was, after all, the main purpose of our visit!!

Friday 18 April
Up early, as we only had the morning left before our flight home. We visited Yankuba, one of our students who had hurt his leg unloading the night before, and took him some bandages and medication. Also visited one of the nursery schools, and took 2 Trekker microscopes to one of the secondary schools. The science teacher here was very enthusiastic, and promised that these would be well used by his students.
Back to Linda's to pack, wave goodbye to Wandifa and Fax, and off to the airport accompanied by Linda and Alhagie, her driver.

Pippa and Tina would like to say a HUGE THANK YOU to: Linda for her wonderful hospitality; Wandifa for his untiring efforts on our behalf; Ebrima Drammeh for his calm and reasoned advice at times of stress; all the PAGEANT unloading team who worked so tirelessly, even in the dark!;the students who entertained us each evening, and to Fax for driving us ( and remaining calm most of the time!). The letters of thanks that we have received from many headmasters have made the whole experience worthwhile.