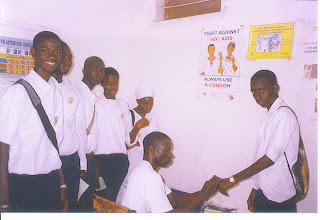 Speaking on the significance of the exercise the principal of the school Mr. Karamo S Bojang expressed satisfaction at the high turnout of students and stated that it would help them to know their status as well as give support and care to those living with the disease.

The head of the testing and counseling group, Barra Njie sounded delighted at the high turnout of students, which he attributed to the principal who was the first to do the test thereby motivating students to come forward.

He also lamented the negative attitude of parents in other schools towards the exercise who in his words order their children not to partake in it.

The exercise is the latest of its kind the organization is undertaking in schools across the breadth and length of the Gambia.