After having myself settled in the back of the land rover, the first very thing that caught my eyes and amazed me as well was a painting done for my twin brother (Sainey) and me by artist Joan Dobie.

It indeed was a great source of pride and happiness for me that an artist of Mrs. Joan Dobie’s calibre and standing has taken a precious time in her 87-year-old life to do us such a great and marvellous painting of River Wey at Tilford in Surrey.

From Linda’s residence, we left for Gunjur or South as many Gunjurians call it (they call it South because it is located in the south Gambia)

Our only major stop on the way was at Tanji Primary School. From Tanji we left for Gunjur, only briefly stopping at police checkpoints in Sanyang and Kachumeh.

We arrived at Gunjur at around 11am where Pippa, Ian and Linda visited my family and they (my family) were so happy and pleased to receive them.

From my family compound of Darboe Kunda, we proceed to the mangrove swamp area with Mr. Badara Bajo well know by many locals as alias Base 5.

From the mangrove we returned back, only stopping at SeneGambia to have a delicious lunch.

Well to be frank and sincere, as for now I have nothing to complain about any unfair focus given to Sainey, like the last time we had a dinner with Tina, Pippa and Linda.

In fact, for me not to feel jealous, Pippa sat in between us during the lunch and we both received almost the same amount of focus.

A Visit with Pippa, Ian, Linda and others to Gunjur

After arriving home tired, the first thing I get to hear from Sainey was that “we are going to Gunjur with Pippa tomorrow” to see our family.
And the very first thing that sprang to my mind was putting and setting my things ready as it is a British appointment in which time is very respected than our W.A.I.T (West African International Time) or G.I.T (Gambian International Time) where less regard is given to time and often the person with whom you have appointment turns up many hours late.
Bearing in mind that it is a British appointment, I push aside my read-till-late-go-to-bed-late-and-woke-up-late timetable and went to bed early so that I could wake up early.
Everything goes well as I planned, I woke up early, took my bath and put on my American styled pair of trousers and my trade mark English Jersey with my so-called nick-name Professor written on the back (I hope to actualize the dreams of becoming a professor one day).
After dressing up, I left for Linda’s residence behind Kotu Police station where Pippa, Ian and other Gambians joined us.
NOTE: end of part one report on our visit to Gunjur and part two could be expected in the coming days.

I have just heard the latest news from Pippa and Ian out in The Gambia so I thought I'd let everyone know how their trip is going so far!

Last Friday, they were invited to visit the family compound of Sainey and Alhassan where they had a brilliant time. Pippa said they were greeted with an amazing welcome and that the twins were very well and delighted to have them as guests in their home!

A week later than expected, the container ship finally arrived! The paperwork took even longer to organise than in April.... however after two wasted days waiting at the dock thinking the container ship had docked when it hadn't, it has been successfully unloaded today! Pippa and Ian are off to the North Bank tomorrow to deliver equipment from the container to Bakalarr, Jarra and other schools there.

More news to come when I next hear from them!
Frances 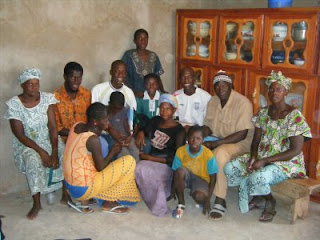 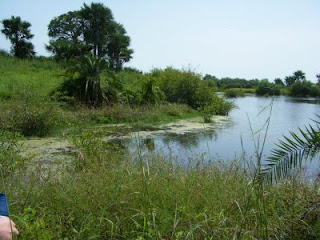 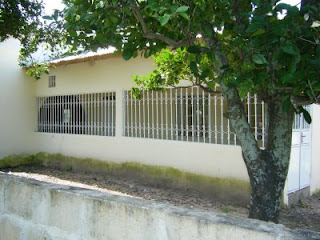 Comping with Pippa at Linda's House 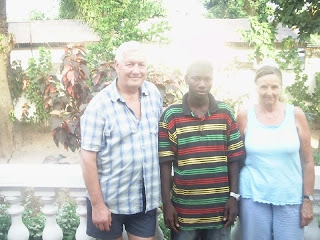 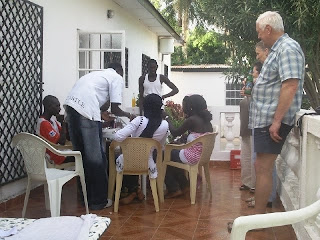 Hello to everyone.
First of all I would like to give thanks to the Almighty who enabled me to come across Pageant, and to every member of Pageant association especially Pippa. On the 26 of October 2008, Pippa called on such a comping at Linda's house in Kotu. I arrived at Linda's by some mins to 3pm and I met some of the students sitting and chatting. As soon as I arrived Linda welcomed me and gave me a chair to sit and soft-drink to refresh me from the heat. After some time all the students had an interview with Pippa about our education, like what do you want to do and why do you want to do it. Then we have chicken yassa, its was very delicious meal and the lady who cooked was a very good cook. We have been exchanging ideas while relaxing and enjoying the breeze by some mins past 5pm. Surprisingly I heard Wandifa Saidykhan saying that one of the girls among us 20th birthday is 26 October, then we just start singing happy birthday to her. After some time again I saw Linda coming out with CAKE and drinks. She shared it between us. From there we take some pictures then we say good bye to each other with happiness. This day was big joy to me because I have met a friend whom I miss for about 2 years. His name is Lamin Kebbeh, and he is the guy sitting next to me at the table.
Well once again thanks Pippa, Linda and Pageant members.Wishing you long life, good health and success with all you want to do or are doing, from Lamin (GTMI)

(A note to UK readers from Pippa: I enquired as to the meaning of 'comping', which is a word often used by the students. It is derived from our word 'camping' but seems to be more like what we would call a picnic - a gathering of people together for a chat and a meal. It can be on the beach or, as on this occasion, at someone's house or compound. It was a really great afternoon - we enjoyed it as much as the students - thanks loads, Linda, for your hospitality.)

The newly formed Gunjur Village Development Committee recently presented a report about its activities and spending for the past six months it has been in office. According to Elimani Touray, the Secretary General of the Committee, they have spent a total amount of 21,526 Dalasis, which was used in filling potholes and water puddles in the community. These served as breeding grounds for mosquitoes. He further revealed that the money was collected from individuals.
The Chairman of the Committee, Abdou K Touray, urged the people of Gunjur to rally behind them and allow them a further term in office to complete what they had started. He also entreated the Islamic scholars to call people towards things that are good for the development of the village. 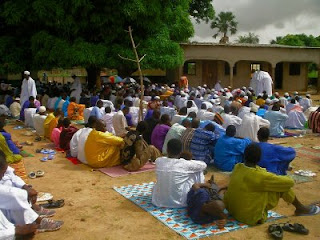 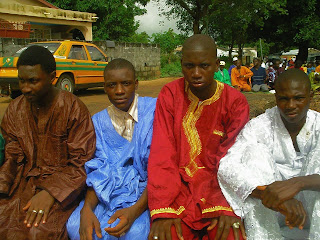 Koriteh is a name given by the Wollof in The Gambia to Aid el-fier. This day is celebrated at the end of every Ramadan and Ramadan is among the strongest pillars of Islam. It comes once in every year, and it’s a matter for every Muslim to fast from the age of maturity - but it’s not just like not to drink or eat but your whole person must also be fasting, like you shouldn’t look or say something bad. Also it is a month of worshiping Allah and asking for forgiveness and helping the poor who don’t have anything or enough to break their fast. If you really do as Allah told us to do in the month of Ramadan then all your sins will be forgiven by Allah.
Koriteh is a day whereby in the morning, or before the day, one helps to make the poor or the needy to be happy by giving out things like rice, money, clothes or anything to the ones who don’t have enough so that on the day everybody will be happy because it is a day of happiness. And everybody should see what they wear or eat is good, the same even to their friend.
After that, in the same morning you have to take a bath and wear new or clean clothes and go to the prayer ground and pray. Then from there people normally go around to greet each other and ask forgiveness and pray for each other, asking Allah witness to us that we have many, many more days like this to come.
But it’s not like only in Ramadan we should do all I have mentioned above. Because we should help each other, do good and avoid saying bad things or hurting people.

(This has been posted on behalf of Lamin Jammeh, one of Pageant's FE students. Lamin is in red in the group photo)