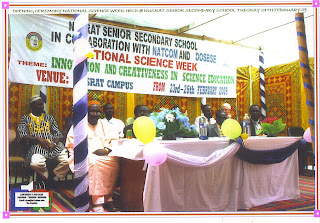 Nusrat Senior Secondary School recently played host to a number of schools as it celebrates national science week. The programme, which runs from the 23rd to 26th of February and is set aside by the department of basic and secondary education, was geared towards promoting awareness of the importance of science amongst students and the general public.
The activities commenced with a march-past by students and staffs of the schools to the Brikama-Serrekunda highway and then back. This was preceded by presentations on the theme 'Innovation and Creativeness in Science Education'. Speaker after speaker dwelt on the theme and the immense impact of science in our lives.
The programme attracted a number of dignitaries; amongst them the Director of Science and Technology Mr. Adama Jobe and Director of National Training Commission (NATCOM) Pap Sey.
The speakers put particular emphasis on experiments, inquisitiveness and critical analysis but do they go far enough?
The audience was also treated to a drama performance by the school drama group on misconceptions about science.
Sainey Darboe.