I have been feeling guilty that I have not yet written up our October trip (I HAVE been busy since our return, but more of that later), so here I am, better late than never....

We flew out on Tuesday 13 October and were met at the airport by Wandifa, his 3-year-old son Mo Lamin and our great driver from last April, Abdoulie. Having been unable to take any excess baggage on this trip we arrived with a mere 4 cases - however, that was soon rectified as we drove to the hotel via Linda's, where we collected a large number of packages that had arrived on the container in August. When we arrived at the hotel we managed to completely fill the lobby (those of you who know the Atlantic will know that is no mean feat!) so it was fortunate that the tour bus had not yet arrived from the airport!!
Having squeezed all the parcels into our room we were marched firmly to the pool bar by Mo Lamin for 'juicy'.. his English is improving all the time! Loads of welcome back hugs from all the hotel staff - it was great to be back.
Wednesday 14 October: started our family visiting to pay sponsorship money - mainly in Banjul today. We visited Campama LBS to discuss assembly of the book shelving we had sent on the container and agreed to start on theirs the following morning. We also dropped in to GTTI to take a couple of packages of useful stationery from the container, and found that the Automotive Department has just started running a new Practical Automotive course, rather on the lines of our NVQ course, which would be suitable for the less academic but practical students who have not done too well in their Grade 9 (similar to GCSE) exams. We discussed this with Malik Faal, the Automotive Department Head, and it seems to be a very positive step on their part - we could well have some students for him in future years. 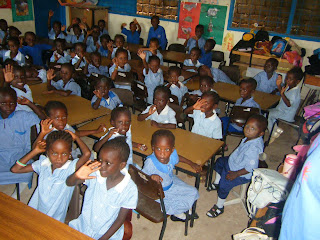 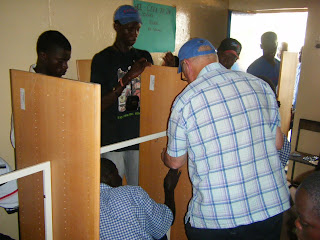 Thursday 15 October: off to Campama LBS again to do the shelving. Wandifa, Abdoulie and Yankuba provided the muscle, assisted by a number of eager Campama pupils and Ian directed operations - 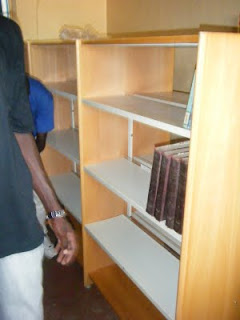 Pippa took photos of the new nursery class and discussed work done since our last visit (tiling the verandah and part of the kitchen floor) and future improvement plans. We then went off to one of the Senior Secondary Schools where one of our students had been excluded from school despite having paid more than the first term fees and all his book fees. We sorted that out, Lamin went back into class, and we then went off to Latrikunda and nearby areas to deliver more sponsorship money to another seven families.