Friday 16 October: Prize-giving Day!! Today we visited King's Kid Academy (in the company of Holly, Gemma and Sara, fellow guests at the hotel) with three things to do: First, to give out the prizes for the Art and English work we started with Tina in April... Tina, Frances and I had selected three winners from each of the two classes who had submitted the work and it was my pleasant task to present the prizes. Some of the children were absent, but the donation of some large class packs of coloured pencils as well as the individual prizes (dictionaries plus either geometry sets or calculators) went down well with all those who were present. I have no photos of the prizewinners yet, but hope to get one from Gemma later. We felt that Mr Michael also deserved a prize, so we gave him a very smart academic year diary/planner. 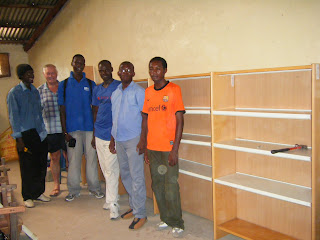 Then, more bookshelves - the assembly team went into action while Pippa went with Pastor Dennis to discuss projects (do you see a pattern emerging here!!??) and the donation of additional funds that had been made by supporters of the school. The Pastor was really thrilled with this support - he says that the day that we first visited his school was the luckiest day of his life! 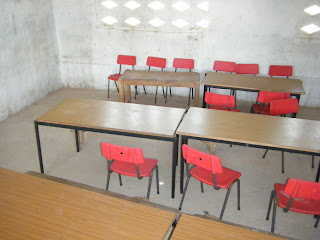 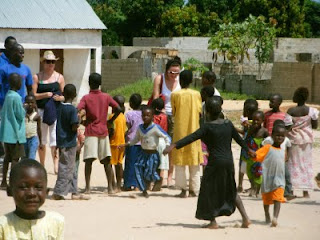 After paying some more sponsorship to the families associated with King's Kid we went off with Mbemba to visit a nearby nursery school that has been started with his help by a couple of Pageant members, called the Lamin Touba Nursery. The children had left for the day and the place was deserted when we arrived, but we looked through the windows to see the furniture that we had sent on the container - when we turned to go, word had obviously got round that the 'toubabs' had arrived and Gemma and Sara were soon surrounded by eager children. (I don't know where Holly was when I took this photo - probably completely buried in children!)
We thought our guests had probably had enough by now, so we finished off our trip with a visit to Lamin Lodge and a very welcome drink before returning to the hotel.