Saturday 17 October was a day devoted to lots of family visiting in the Serrekunda and Abuko areas to pay sponsorship and to discuss future courses with several of the FE students - it is always a real pleasure to go to visit these families and young people who have now become such good friends and we thank them all for their hospitality.
Sunday 18 October: Gunjur visiting day! We collected Linda and the Darboe twins en route and were in Gunjur by 11.00am. We parked the minibus in the twins' family compound as has now become our custom and walked along the lane to the nursery school. As on other days, we had three things to do...
Ian and his assembly team set to work on the Nursery school bookshelves (the team was getting really expert by now) and I went to start a PAGEANT Loan scheme with the ladies of the Mothers' Club associated with the nursery school. 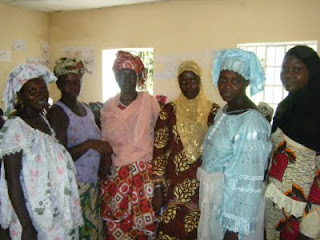 The details of this scheme are reported more fully on the PAGEANT website, but a photo of the 'start-up' group of ladies is attached to this blog. The go-between for this group is Binta Jammeh, who teaches Home Science at the Gunjur Upper Basic School. As well as speaking excellent English and being able to translate between Pippa and the Gunjur ladies she has decided to lead from the front and take one of the first 'start-up' loans herself - Binta is at the right of the photo.
Once the bookshelves were assembled and the loans arranged it was time to discuss projects with Ahmed Manjang, the founder of the school and his committee. We have agreed to fund improvements to the school, with Wandifa checking at each stage that work is progressing properly. The first thing to be addressed is the perimeter wall (or fence, as the Gambians call it) - the kitchen will follow if the first project is completed satisfactorily.
Having completed our work at the school we returned to the Darboe compound, where we had a warm welcome from Kaddy, the twins' Mum and a delicious meal cooked by Musa. Nfansu, the twins' father, returned from his farm shortly before we left, so we did not have as much time to talk with him as we would have liked.... next time, maybe.
We returned to the hotel, dropping off Linda on the way, and just had time to change before a couple of our FE students came to see us for a drink and a discussion about their respective courses.
One of them, Lamin, is doing a Community Nursing course in an up-country hospital. He had asked us to bring him a blood pressure measuring machine (a sphygmomanometer, as he had correctly called it) for his course and we were able to give him one for babies as well as the normal adult-szed version - he was delighted as he said that the clinic did not have such a thing at all.
The other, Momodou, is our first PAGEANT University student. He is now in his third year at the University of The Gambia and is doing very well - his is a real triumph for sponsorship as he would not have been able to even progress through Secondary School without the help of his sponsor and his undoubted talent would have been wasted.