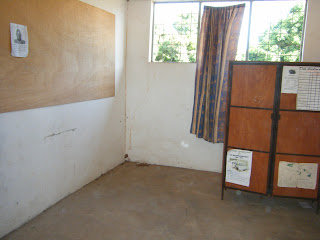 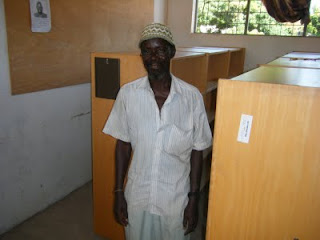 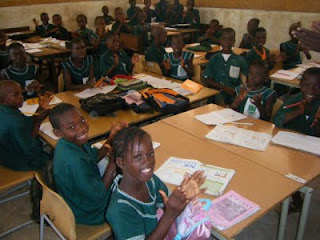 Thursday 22 October: After yesterday we decided to have a slightly less taxing day - we went to Wellingara LBS, where a lot of the school furniture from the last container had been sent, as well as - you've guessed it - more bookshelving! This was the last of the shelving to be assembled and by this time the team (complete with Yankuba again now) was really slick. In no time the room that was to be the library was cleared, swept, the component parts of the shelves were brought in (many on the heads of the pupils) and the shelving assembled. The headteacher could not believe it had happened so quickly - he was truly amazed! He showed us the difference made by the classroom furniture we had sent - it had enabled him to double his intake for the year and had meant that his school could be used for some of the area examinations that are carried out at the start of each year. 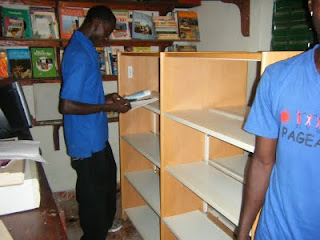 We had sent nine bays of shelving to Wellingara as we did not know how much space they had, but they only had room for seven. So, as we had been introduced to Wellingara by Ansumana of KMJ Nursery, AND he had come today to help with the shelving, we decided to take the surplus two bays to KMJ - Ansumana was delighted! We loaded all the bits onto the roofrack of the minibus and took them directly to the school, where they were instantly assembled. 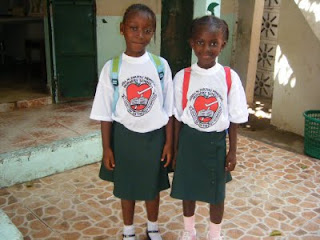 While we were there we were introduced to the new members of staff (some of last year's teachers have now gone to college) and two little girls showed us how they are using the green uniform skirts we sent out on the container. Another school it is always a pleasure to visit! 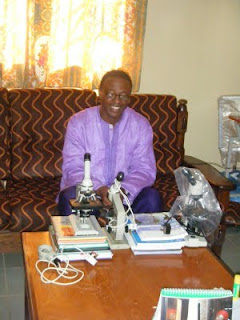 Friday 23 October: Friday, so we just went out in the morning and were back in time for afternoon prayers at 2.00pm. We took three microscopes and some revision workbooks for Maths and Science to SOS SSS in Bakoteh - the headteacher was delighted. We then visited a number of families in the Kotu - Kololi - Bakau areas, after which we returned to the hotel.
After prayers Yankuba and Wandifa rejoined us at the hotel and we showed Yankuba a small printer we had brought with us for him to try out, with the idea of him being able to take and print both ordinary prints and passport-type photos - many Gambians are constantly in need of the latter for ID cards, student registration cards and so on. He and Wandifa were very enthusiastic about the printer and found it very user-friendly, so we will see if it is a success.