Saturday 24 October: We spent the morning at the hotel by the pool! Wow, so this is what a holiday is like..... However, by the time Abdoulie arrived to collect us at 2.00pm we were getting a bit bored, so we were ready and eager to go again - particularly as this was the day of the party at Linda's for last year's Grade 12 students. Now we would find out who had won the promised netbook for the best Grade 12 results...
We had decided to add to the party atmosphere by celebrating the 18th birthday of two of our PAGEANT students, Fatou and Amie - the hotel chef had made us a lovely cake (WITH candles) so we collected that from the hotel kitchen and set off for the party.
When we arrived we found that two of Linda's colleagues from the Peace Corps had decided to join us, as they were keen to meet some of our older students and to see PAGEANT in action. 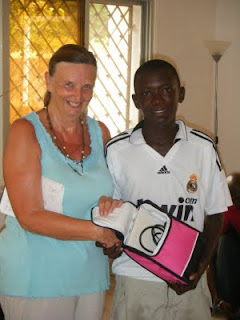 So first - the Grade 12 results: each student came in turn to sit with me, to go through their results and to enter them into my chart. There are three streams for Grade 12 - Arts, Commerce and Science - and some students had take eight subjects, while others had taken nine. The fairest method seemed to be to total the points for each student and then divide by the number of subjects taken - this was agreed and after working out the numbers Modou Jeng (St Augustine SSS) was the winner by a small margin from Sainey Darboe (Nusrat). Modou was delighted - he wants to go on to study Medicine at University and is currently doing an Access course in preparation. He is a thoroughly nice, as well as intelligent, young man - we wish him well for his future and will help his sponsor to fund his studies.
All this excitement had made everyone hungry, which was just as well as Tida, Linda's maid, had made a wonderful meal of chicken yassa and rice - really yummy! 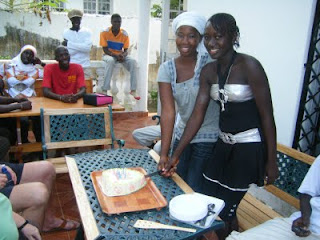 The birthday part of the celebration then took over, with the cake making a perfect dessert... Fatou and Amie blew out all the candles and cut the cake in the approved manner, everyone sang 'Happy Birthday' and the cake was polished off pretty quickly by the assembled company. 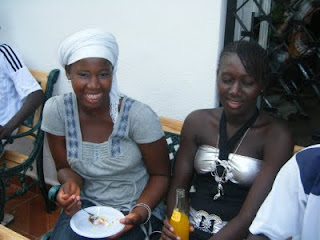 It was a really good afternoon - great to catch up with nearly all of our Grade 12 students, all of whom we have got to know well over the past few years, and Amie and Fatou felt that their birthdays had been celebrated in style. Abdoulie took most of them home and we gave bus fare to those travelling in the opposite direction.
We stayed on and worked out outstanding finance and sponsorship with Linda, as we would be leaving money with her to bank, to enable Wandifa to deal with the few items we had not managed to complete during our stay.

Sunday 25 October: The morning saw us in the hotel once more, but this time we were busy taking photos and details of several children that had been recommended for sponsorship, who would now go onto our waiting list. 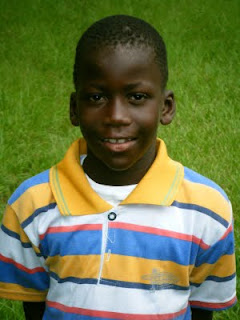 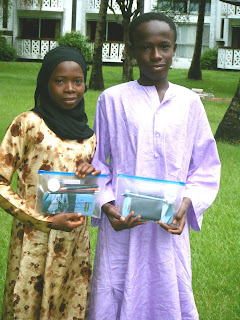 We also saw some children who had recently been sponsored and who had come to meet us to receive their 'welcome to PAGEANT' pencil-cases.
In the afternoon we went down to Wandifa's compound where more families and children either received their sponsorship payments or were entered onto the waiting list. We took some PAGEANT members with us who had arrived at the hotel - we were as surprised to see them as they were to see us - and we all enjoyed a great afternoon of games, dancing and chatting - thank you, Wandifa, for making us all so welcome.