Monday 26 October: One of the most important things left to do was to go to visit some Upper Basic Schools with a view to seeing which would be willing and able to host some Practical Microscopy Workshops for Science teachers in February 2010. We had recently been awarded funding for the Workshops by the Royal Microscopical Society (RMS) - I had been notified of our success in winning one of the Vice President's Awards for 2009 while we were in The Gambia - so we were eager to start the ball rolling. We visited several schools and decided on three from the South Bank and one from the (less populated) North Bank. All the headteachers we approached were very keen on the idea (and it is the organisation of these Workshops that has been keeping me so busy since our return!). 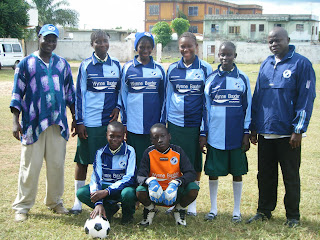 At one of the schools we presented some football kit that had been donated to us - several children appeared as if by magic to model the kit for us, including a couple of PAGEANT sponsored girls. They told me that the kit should definitely be for the girls as they had won all their matches whereas the boys had lost several!!
As well as visiting these schools we went to the Hotel School to check on the admission of one of our students, visited a few last families and children in school - then back to the hotel in time for our last Happy Hour drink, supper... and packing.

Tuesday 27 October: Our last morning.. could two weeks really have gone by so quickly? Lots of goodbyes to our good friends, the staff at the Atlantic (don't go, the plane is not flying today, stay with us, you are Gambians now...) and a few more last minute visitors - Ousman arrived from the North Bank with some new pictures, others arrived with small gifts for sponsors and friends in UK. At last it was time to go - we left the hotel with Wandifa and Abdoulie (Yankuba was again at college) and then stopped at Billy's for a last lunch and drink before our final drive (via Linda's again, to drop off a few things) to the airport. We just beat the tour bus again, checked in, had a farewell drink in the Airport Lounge with Wandifa and Abdoulie.... and then flew home.
A pretty good trip, all in all.... and we look forward to February 2010. See you then, everyone - get the rooms ready and the Julbrew on the table, Atlantic - we'll be raring to go again.