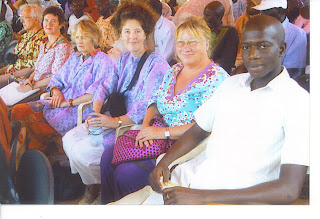 Two British nationals namely Dr Nick Morris and Anita Bew were on Sunday 31st January 2010 awarded honorary citizenship at a ceremony held in Gunjur village in recognition of their long-standing contributions to the Gunjur Marlborough Link which started some twenty eight years ago.

In his acceptance speech Dr Nick Morris who founded the link thanked the community for recognizing his efforts in promoting the link with the aim of creating a new world order for peace, justice and equality.
"I am moved and humbled by this event. This is the culmination of an extraordinary adventure which started in another part of West Africa - Togo. My experience in Togo where I worked as a teacher for one year and stayed with a warm, caring Muslim family set me on the journey to the Gunjur-Marlborough Link. I returned home so much richer for the experience I had and wanted to promote cultural exchange for other people." he said.
He added that over one thousand five hundred people have exchanged visits from Marlborough and Gunjur since the inception of the link with the prime aim of learning about each others cultures.
"Over nine hundred people from Marlborough visited Gunjur and stayed with families to learn their culture and all of them say that their lives have been positively changed for the experience. This is a remarkable experiment in human relations", he added.
He likened the Gunjur-Marlborough link to a mango tree which is long-lasting, has intense foliage that provides shade, fun and is fruitful, ending with the poser "what is the purpose of a relationship if it is not fruitful?"
For her part, Anita Bew thanked the people of Gunjur for their warm welcome and hospitality that makes her feel at home.
"I have always been told Gunjur is my home, but it is now official. I must thank my hosts whose warm welcome, care and assistance on my first visit in 1985 really meant so much to me that I was motivated to do more to promote the link. I have had many thing from Gunjur but this surpasses everything", she said, clutching back tears.
The Alkalo of Gunjur Village Sulayman Touray thanked the recipients for their efforts which, according to him, have yielded positive results for the Gunjur Community and the Country as well.
"You richly deserved this award for your efforts, which have gone a long way to promote the advancement of this community. There is no better award we can give you than this to show our appreciation for your loyal and fruitful friendship over the years", he said.

The Governor of Western Region, Lamin Sanneh described the Gunjur-Marlborough Link as a bright example of a partnership that can positively change the reality of our world and bring development to poorer parts of the globe.
"Gunjur-Marlborough link has not only helped in the education of young people, but it has also provided further education for people from the community who have now become assets to our country, especially in the education sector", he observed.
Drawing on the benefits of the link, Governor Sanneh made mention of various partnerships that have been formed between schools in The Gambia and those in the United Kingdom which he said have been inspired by the Gunjur-Marlborough Link.
The Gnansimba of Gunjur, Mai Kebbeh, also expressed thanks and gratitude to Gunjur-Marlborough link on behalf of Gunjur women folk for establishing gardens that have served as sources of livelihoods for them.
"Gunjur-Marlborough link has immensely helped progress in this community, because we(women) use proceeds from our gardens to support the education of our children. This is helping us in laying a firm foundation for the future progress of our society", she said.