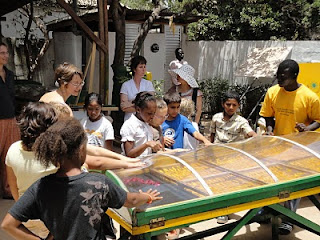 Students of the Banjul American Embassy School in Fajara, Kanifing Municipality, recently visited the site of Solar Project ‘Tiloo’ a company making solar equipment in Kanifing South, off Kaiaraba Avenue, as the company celebrated a Solar Day on Saturday.
Speaking on the purpose of their visit to the project site, Ms. Blair, a teacher at the Banjul American Embassy School said that the visit was supposed to familiarize the students with various inventions that are being undertaken in The Gambia. She said her class was studying inventions, mostly of Haitian origin and they have thought it expedient to examine the Gambian experience in this respect.
“We were having a class in invention and these were mainly inventions in Haiti and elsewhere, which is why I decided to bring them to the solar project site for them to see for themselves inventions from our own backyard in The Gambia.
“Our visit to the Solar Project Tiloo-Gambia is very important because the most important problem in The Gambia here right now is deforestation as the forest cover is being depleted by local communities for fuel and cooking,” she said.
One of the students hailed the visit as important as it avails them the opportunity to see for themselves the alternative use of energy. “The visit is important because they use solar energy often and they don’t need to use electricity. It is also important for us too because we get to learn a lot about new inventions.”
Another student stated that curiosity had made them want to see how to use solar energy to cook instead of using firewood. “We are also here to see how we don’t have to waste things by using solar power and we also got to learn that they use computer fans in the solar oven to get the waste air out.”
For his part, Muhammed Jarra, the manager of Solar Project Tiloo said that the visiting students have learnt a lot about how solar works, its different parts of and how it is used for baking or cooking.
Mr. Jarra added that they are trying to work with schools and students to help them better understand how solar works and how it can preserve the beautiful environment by being used as an alternative source of energy instead of cutting down the forest, which can take a toll on both the environment and the society at large.
At the event marking the Solar Day on Saturday, Mr. Muhammed Jarra highlighted the advantages of using solar energy as it is a cheap and convenient way of cooking. “We are trying to raise awareness for environmental protection as the forests in The Gambia are endangered and the soil dries because of deforestation. That is why it is important to use sustainable energy,” he said.
He said that with a solar cooker or a tunnel dryer, women do not need much time to cook anymore and that they have the possibility to make their own business by selling cooked and baked food which offers more financial independence. “By using a solar cooker, people prevent smoke entering their lungs, plus they avoid inflammation of the eyes. In other words, the food cooked and baked by the solar cooker is much healthier as it preserves the vitamins. Besides, as using the power of sun is free, more people boil the drinking water, which frees it of dangerous germs.”
One Gambian carpenter is currently employed by the project. He manufactures the solar cookers and the tunnel dryers. They make sure that most of the materials they use for the cookers and dryers are mainly local so as to support local businesses.
Mr. Jarra said that by using solar cookers, deforestation and C02-emission can be reduced. Many families in The Gambia do not have a fridge: as a result fruits and vegetables can be stored only for a short time and with the tunnel dryer you have the possibility to preserve the food up to six months. “As at now there are currently two Gambian bakers employed, and they bake daily like cakes, muffins, cookies, sweet bread, croissants, fish and meat pie and much more. A small but very nice restaurant is part of the bakery and is visited by Gambian cooks also where the local people and the tourists meet for coffee and cake. With this, we want to promote the idea of a community with ecological awareness,” he added.
He said that there is awareness training and the aim is to sell the advantages of solar energy to the Gambians. They want to improve the awareness of health and hygiene with creative and interactive presentations.
He argued that the local traditions and customs are very important to the natives. Therefore it is ideal to start with the children and tell them about the use solar energy. Mr. Jarra noted that with school programme they sponsor schools with two cookers and show the students and teachers how to use them. The profits realized from such ventures are again used to support other schools.
The project started sponsoring schools in 2009 starting with three schools namely St. Peters in Lamin, St. George’s in Basse and Charles Jaw in Bundung. Five students from each school are given five days of training and at the end receive certificates.
St. Peters was awarded a certificate and a cash box so as to continue using the solar cooker as it is reliable, cheap and convenient.The manager finally advised the people to keep the nature safe and fight against global warming.