During my recent visit to The Gambia I was lucky enough to be invited by Pippa to join her on a trip to Jarreng, a village about 130 miles from Banjul.
Pippa had planned a trip to the village to distribute PAGEANT items and to speak to the parents of sponsored children. I sponsor Sheriff Ceesay who attends Jarreng Basic Cycle School and it was a great opportunity to see him.

Our wonderful driver, Abdoulie, collected me from my hotel, The Kairaba, at 6am and together with Wandifa, Yankuba and Sainey, Pippa and I started the long and diffcult drive to Jarreng.
The last time I had visited the village was in 2006 and the roads were very bad but now the road up to Kanilai (The Presidents village) was tarmac but then the road became more of a dirt track and was quite bumpy in places.

We went through a number of police and military check points but Pippa and I found ourselves seated in the police station at Kalagie as an immigration office was not happy that we did not have our passports with us for ID. After some heated persuasion from Wandifa and Yankuba we were allowed to continue our journey but having learnt a lesson for future trips: take a photo-copy of your passport including the page showing the stamp when you entered The Gambia if travelling out of the tourist areas.
During part of the journey we were accompanied by police officers who commandeered the vehicle for a lift to another village. At least we passed through the check points without any difficulty with our uniformed passengers!

Eventually we arrived at Soma, a busy place which is the crossroads between the Trans Gambia Route and the road between South and North Senegal.
The boys disembarked to get some local breakfast whilst Pippa and I had bananas and I tried a local delicacy Pippa had said would be sweet, something like doughnuts! Small round fried balls, did not taste of anything much, could have been chicken but I was not convinced.
From Soma the road to Jarreng was pretty good and we arrived in the village about Noon feeling very hot and tired but the children and ladies were all so pleased to see us and we were soon sitting in armchairs under the trees.

We were in Yankuba's grandmother's compound and everyone gathered around to hear Pippa speak. It appears that some parents of children who had not done so well at school had been asking Yankuba to change the school reports. Pippa explained that this action would risk future sponsorship for their child. Pippa and Wandifa then spoke with individual parents and children who are sponsored. Yankuba then opened a large sack of clothing for distribution. At first this was a very calm affair but as fewer items remained people began to get anxious that they would not receive anything and it became a bit of a scramble. Unfortunately there is never enough to give to everyone who is in need. 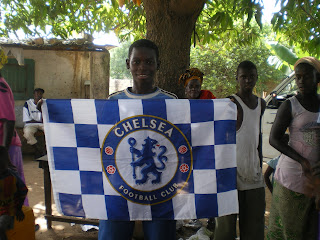 I had some football shirts and three pairs of football boots to give but with so many boys and only three pairs of boots I was worried we would be trampled underfoot. Quietly I asked Yankuba to select three boys he thought the boots would fit. Oh how they tried to squeeze their feet into those boots, like a scene from Cinderella, but eventually three lucky boys had new football boots and probably haven't taken them off! 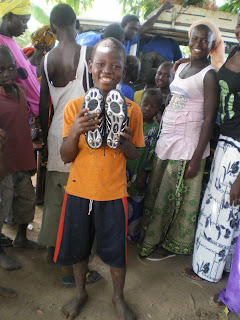 Our hosts had prepared a delicious lunch of chicken, fish and rice which we shared.
After lunch Pippa took photos of some sponsored children and we had to leave to visit the Skills centre. 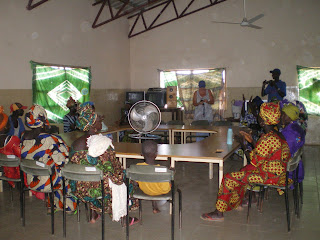 The building was located down a track and was well laid out with the tables provided by PAGEANT from the last container. Pippa gave a speech and all those attending applauded and thanked PAGEANT for the support provided.
Our next destination was to Wandifa's village, near Soma on the way back from Jarreng.
Pippa had mosquito nets to distribute and gardening tools which had been donated through the Gift card scheme with PAGEANT.
Pippa explained that this village is rarely visited by westerners. 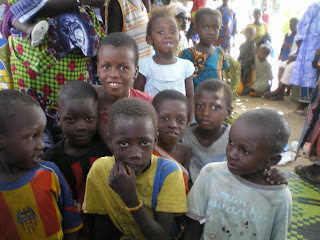 Much pushing, shouting and general disorder ensued and Wandifa resorted to a big stick to try to control the excited crowd who eventually formed a line to receive biro pens.
Pippa had some hair bands to give and all the girls surged towards us in an effort to get one.
Woolly hats, baby clothing and blankets caused the girls, some not much older than 7 or 8 to grab a baby in an effort to be given something.
In the end it became impossible to control the surge of people upon us and Wandifa returned items to the safety of the vehicle to avoid an accident.
I have never witnessed anything like this before, and it makes me feel very humble and sad that these families are living in such conditions that to be given a pen or a simple hairband or plastic bucket can bring them happiness. I cannot praise the work of Pippa and the PAGEANT team enough.
We left in a cloud of dust as I tried to give a few sweeties to the children. (Sorry Pippa, I know sweets are bad for their teeth)

Our journey back was uneventful and as darkness fell, the smell of burning wood was the tell tale sign that we were approaching a village.
Abdoulie swerved to avoid a huge snake, a python they said, crossing the road.
Something big flew towards us, could have been an owl or bat and Yankuba spotted a Gambia fox .
The only other night activity was a required comfort break for Pippa and me to visit the bushes and look at the beautiful night sky so bright with stars.

Arriving back at the Senegambia strip to drop me at the Kairaba, we were stopped by the police check-point and a major problem. We had just travelled over 260 miles, and the policeman said that Abdoulie did not have a driving licence! Abdoulie said that he had handed the document to him but nobody had it!
Eventually they left to take Pippa back to Banjul without the driving licence.
Next day however, everything was sorted and Abdoulie was given a new licence.
It seems the police admitted to a mistake being made.

Thank you Pippa for an eventful trip, Abdoulie for your safe driving, Wandifa and Yankuba for your good humour and control and Sainey for your interesting stories.
I don't know when my next trip will be but I will continue to support the wonderful work PAGEANT do and hope my story may encourage others to visit this country full of smiles.
# posted by Carole Odumo @ 11:22