A TRIP TO RURAL GAMBIA

I have always looked forward to my trips up-country in general, and Jarreng in particular. On my first trip in 2009, I was shocked at the level of poverty and deprivation the people in one of the poorest swathes of one of the poorest countries in the world have to endure.
And yet, I was substantially impressed with their determination to make things better for themselves. I have, through my conversations with people my age, the High School Principal and parents, known that the daily scrimp and scrape for survival in the rural areas has deprived many children of the chance to acquire education. Many young girls abandon school to get married at an early age, whilst boys provide labour on the farm. Their parents simply cannot afford to keep them in school.
I could not but be impressed with the countless positive impacts (and I mean countless) that Pippa's work and the contributions of PAGEANT members, big and small, have had on the precarious lives of the beneficiaries.
At the Senior Secondary school we were informed that the students being sponsored by PAGEANT have been doing well: Yusupha had "A" in Science in his exams, which is no mean achievement.
We then moved on to Yankuba's compound to see his lovely extended family, and also give mosquito-treated bed nets to a group of women who accumulated in the compound to protect themselves from one of the diseases that deprive most people their dear and loved ones in Africa - Malaria.
And welcomed is what we were. They revealed that the mosquito bed nets they have received over the years from the charity have immensely reduced the rate of Malaria sicknesses in the village.
Tina's extremely good sense of humour was sorely missed. She was ill and was not her normal self, and Pippa tried to step into her shoes, but with less success. Tina is indeed my comedienne-in-chief!(I hope am not getting into trouble). 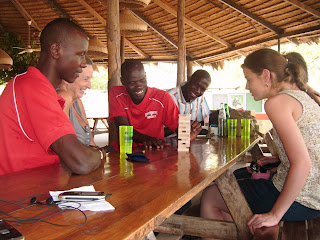 Note from Pippa: This photo shows us playing 'Jenga' at Tendaba on our overnight stop on the way to Jarreng... Sainey (in the stripey shirt) found this VERY difficult, but persevered manfully!! Abdoulie won the set to take home - I don't remember that he ever lost a game. We also played Scrabble - modesty forbids me to say who won.....