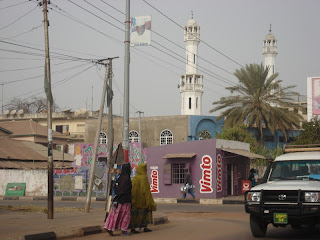 Still not too hot today, the sand hanging in the air is still keeping off the hottest sun. Our first assignment today was visiting Gambia college to check out the rooms to be used for the science workshops. The head of the college had this arranged very well. We also bumped into a young reporter from a national paper who hopes to come and report on the workshops. Three or four of the best student teachers I met at the course last year who are on teaching assignments nearby should hopefully be able to attend as the microscopy and chemistry will be new to them.
Thereafter we visited several schools where sponsored children attend. Some appeared well organised and reasonably well maintained, others less so. While waiting for one sponsored child to turn up at a Lower Basic school, I vacated the head master's office and chatted with some of the children. This evolved into mental arithmetic and “Simon says”. At that point I decided a strategic withdrawal as the crowd increased in size and there was danger of a ruck forming. 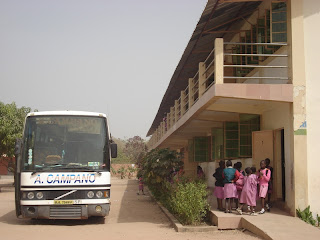 As we were leaving a large quantity of materials arrived accompanied by a Swiss lady. She showed us a folder of pictures of students at a school near Zurich making and putting together all the resources before being sent to the Gambia. Her passion to move away from board based to experiential learning struck a chord with us. 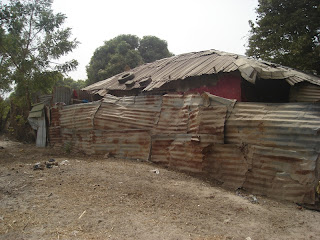 Visiting several compounds, we were invited to have a meal at one compound which was very kind as I don't think we were expected. Their garden was well looked after and had a very deep well. 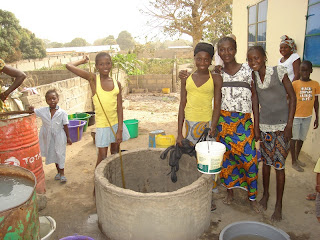 Tomorrow morning we will staying put to compile about 20 science kits from the boxes of carefully selected stuff we have brought out. These science kits have in many/most cases been donated as alternative gifts by kind Pagean supporters. We will be using the same items as in the kits during the workshops.

For all you chemists out there you will be overjoyed to hear we now have potassium permanganate!

Finally, the creaking wheel bearing on the minibus has been fixed (Abdoulie you are a star-the new shades suit you).

Finally, finally, Fatoumata (the one studying politics etc.) is really looking forward to seeing you, Frances :-)