Our fundraising to rebuild the collapsed water tower at SHM Nursery in Gunjur exceeded our target. The water tower has been rebuilt and the school has reopened. Thanks to everyone who helped, particularly Sandcross Primary School in Reigate, Whipton Barton Junior School in Exeter and Horsham Rotary Club.
Read more about fundraising for the water tower. 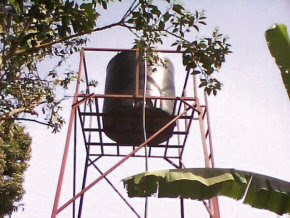 The New Water Tower
The school's water supply comes from a borehole. At present they have an ancient diesel powered pump to move water up into the tower. The diesel generator often breaks down, and fuel supplies in The Gambia are often difficult to obtain for several weeks at a time. The school﻿ is proposing to replace the old pump with an environmentally friendly solar powered system, which will have very low running costs. Pageant has launched a new appeal to pay for this.
See this page for full details of our appeal.
# posted by DaveG @ 15:31