Wednesday 10th April
You will not be surprised that Tina and I had a bit of a lie-in and did not go out until about 10.30am!
On our way to drop off more letter forms I bought a packet of ‘bitter tomato’ seeds, as I have been unable to find them in UK. ‘Bitter tomatoes’ are often served in Gambian compounds and are really delicious.  (Having bought the packet, I found it was labelled ‘African aubergines’, so maybe they are available here after all.)
We gave out several letter forms, went to discuss some business plans with a sponsored young woman, took some books into SOS SSS and had a discussion with the Principal there before returning to the hotel for a meeting with three Pageant-sponsored University students.  Alan, Paula, Charlotte and Joe all came to chat with the three students and I am not sure who enjoyed it most!
Tina and I then went down to Billy’s for dinner – my last ladyfish of the trip.  Lovely food, as ever…
We then packed several boxes with materials that we wish to leave in The Gambia for future visits – to be left with Linda in her store-room.

Thursday 11th April
A couple of students came to see us just after breakfast, so Tina, Charlotte and I set off at about 9.30am.  First stop NARI in Brikama to buy some Artemisia Annua plants – this time we bought a whole tray of seedlings, to see if some of our established gardeners can cope with the plants in this form.  Then into Gambia College to deliver some English books for the trainee teachers – I met the College Principal, who said she hoped we would be back to do more Science Workshops next year!
Our next visit was to Humanity Nursery – this was to show Charlotte the school, as she had raised a considerable amount of sponsorship for a project there, but had not seen the school herself.  Holiday time, so classes were not running, but it made it easy to look round the school buildings themselves and to see the roof that needs to be replaced before the rainy season.  Having decided that she would indeed be happy for the money to be used in this way, we called into GTTI so that she could personally hand the money over to Faks (who was working with his students even though it was a holiday!)
Back to the hotel, a quick shower and change before going over to Linda’s to sort out boxes and money!  This always takes much longer than expected, but we must be getting better at it, as we made it to ‘La Romantica’ on the Senegambia strip at the agreed time of 7.30pm for our last dinner of the trip.
We were a good crowd – Tina, Linda and I, Alan, Paula, Charlotte, Chris, Joe and Kerris plus Abdoulie, Wandifa, Momodou and Sainey.  Musa, Sainey’s brother, is the ‘La Romantica’ chef and the food was, as ever, delicious – as Kerris said, it seems strange to say that a Gambian has cooked some of the best Italian food one has ever eaten, but it is true!
A great evening… then back to the hotel for the last time this trip.

Friday 12th April
Last breakfast, packing, goodbyes to all the staff, handing over the last bits and pieces to Ann and Brian… then off to the airport (via Billy’s for a last drink and Linda’s to leave a last box and the remaining dalasis).
Checked in – all went OK, although the guy at the desk tried to charge me for extra baggage.  (I forgot to tell you that Wandifa gave me a most AMAZING present – a full-size ballophone!  I was so thrilled, even though he really should not have done it….)  Anyway, Baba at the hotel had packed it up for me for travel in the hold of the plane, we had weighed it and the other two cases and we were, maybe, 1Kg over our allotted baggage allowance.  The airport scales, however, said we were 4Kg over - but when I said we had weighed it at the hotel there was no further problem.
Last drink with Wandifa, Abdoulie and Yankuba, (who managed to get a break from work to come and see us off).  Last hugs….  Thank you all so much, our wonderful Gambian Pageant team, take care of yourselves. 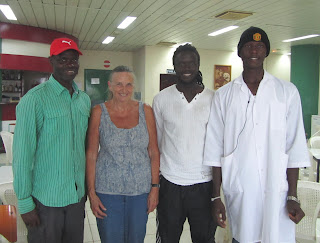 On the up side – we were airborne 10 minutes before our departure time and we arrived at Gatwick nearly one hour early!  Our luggage all arrived OK and the ballophone was undamaged… and it is not THAT cold!