Chestnut Grove Academy is a comprehensive school in Balham, South London. They have a long association with Pageant, and in particular have provided lots of help for Banyaka Lower Basic School in The Gambia. [more about this here]. They held a 'Comedy Evening' on 11 October 2013, with proceeds split between Pageant and a village building project in Cambodia. Pippa reports on this very successful fundraising evening:

"The Chestnut Grove Comedy evening was a FANTASTIC success! Ian and I were invited along to open the proceedings with a short presentation about Pageant, so we arrived early to make sure that we could set it up OK on the school computer as well as arranging some prizes that we were donating for the raffle and a table with Pageant literature.

The school drama hall had been chosen for the evening's entertainment and a large room opposite (mainly used as a gymnasium, we thought) was doing duty as the 'ante-room', with a bar at one end and a cup-cake stall at the other. The beer had been sponsored by Belleville Brewing Company and 200 beautiful cupcakes had been donated by Lola's Cupcakes.

The Senior Deputy Headteacher, Dominic Bergen, introduced us at the start of the evening's entertainment and then Arthur Smith took over the rest of the evening as compere for the comedians themselves. 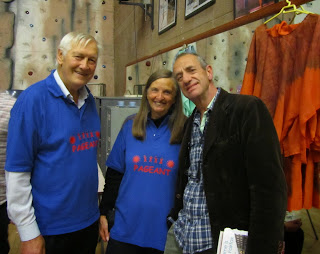 
During the first half we laughed with Ivo Graham, Suzie Ruffell and - a surprise and very welcome addition to the line-up - Jack Whitehall. It was just as well that the interval followed Jack's routine, as a large number of the younger members of the audience left their seats and followed him out of the hall, hoping for photos and autographs!

During the interval all the beer, most of the wine and nearly all the cupcakes were consumed by the enthusiastic gathering and the raffle was held - our Gambian offerings went down well, with one of them, a caftan, immediately being modelled with much hilarity by a male member of the audience. 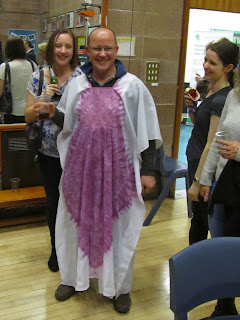 In the second half Arthur introduced Elliot Steel, Jo Ostrowska and, finally, Kevin Day - all received with great enthusiasm. Dominic wound the proceedings up and was clearly delighted at how the whole evening had gone - he said that the school had never done anything like this before, so he had been unsure of how much support they would get. He need not have worried - I do not have the final numbers, but the estimated audience was in the region of 170, very nearly the capacity of the hall.

Huge thanks go to: