A slightly later start than anticipated because Wandifa’s eldest son, Mo Lamin had been taken ill during the night and Wandifa had taken him, along with his mother Mariama to the local hospital to see a doctor. We all hope he gets better soon.

Off then to Kings Kids Academy, a school we have visited many times before and where we have funded a number of projects. We were met by the proprietor, Bishop Dennis. We attended a school assembly at which Bishop Dennis gave a short eulogy about the work and dedication given by Ian to Pageant and the ways he had helped the people of The Gambia. In honour of Ian a building in the school has been named after him.

We then went on to discuss projects. We had agreed to fund tiling in two classrooms. One had been done but Bishop Dennis wanted to use the rest for something else. We were unable to agree that then and asked him to provide us with a new project proposal with costings. Bishop Dennis then showed us his long term plans for the school involving major expansion. These plans will cost a large amount of money and would take considerable time to complete.

We are looking at a project to drill such a borehole at Kani Kunda School which is way upcountry. That school has no water at all in the school premises, not even a well. The proposal is to drill a hole deep enough into the aquifers and then pump the water up with an electric pump powered by solar energy. Needless to say, the school has no mains electricity. The water would then be stored in a 4,000 litre tank which would automatically be replenished when used. Mr Touray from the company had already supplied us with an estimate, but there were a number of points in it which required clarification which he was able to do. We will now go to the school next week to discuss this exciting project.

Being Friday, we decided to have a short day. We stopped off at a bookshop appropriately named “Timbooktoo”. We bought a few school books there and then went for a drink at the Calypso Bar at Cape Point. The bar overlooks a lagoon  lying between the beach and the land. It is home to 20 or so crocodiles that can usually be seen basking on the far shore, but there were few to be seen today. We did see a great display of fishing and diving by a heron, some kingfishers and numerous other birds, small and large none of which we knew the name of (no twitchers among us)!

Back then to the hotel at about 3pm 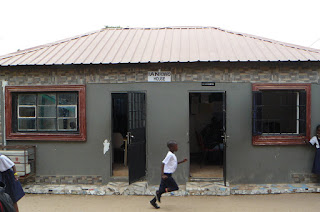