We had planned to go upcountry today, but Mo Lamin, Wandifa’s son had become ill again and Wandifa, Mariama and he were at the hospital. We do hope he gets better soon.

So we changed our plans and will go upcountry later in the week. We started with a brief follow-up visit to Kotakala school where we went last week. Ebrima Cham hopes to start the works we have paid for before we go back.

On then to Nusrat Senior Secondary. This is one of the most highly respected senior secondary schools in The Gambia. As well as taking photos of Pageant sponsored students who are there, we were going to give prizes of tablets to the two Pageant students who gained the highest marks of all our students in Grade 9 last year. Our congratulations go to Mohammed Ansah and Kaddy Sowe.

On then to Banjul. We went first to Unity Nursery where we have been many times before. As ever the children are an absolute delight and the staff very enthusiastic, dedicated and hard-working. The school is clearly successful as it has expanded into newly-acquired premises on the other side of the road, whilst keeping the original. The school will double in size. Each site will have three nursery classes and has its own toilet facilities. At the moment the new site has only two classes which have been well converted. A third classroom still needs to have work done to make it usable, and the school hopes to have it ready by September.

Next was St Augustine’s Upper Basic to take some photos from where we were given directions to find Banjul Methodist Lower Basic. This is a most imposing old building. Above the main entrance is a sign from the past “Banjul Boys High School, 1921”.

After taking some photos of students we concluded our school visits for the day at St Augustine’s Senior Secondary. We have one new student there, but we also were after some information. We were anxious to trace one of Pageant’s most able students, Francis, who had received a very good Grade 12, but we were unable to find him. His phone went unanswered and a number of contacts from previous schools, etc. also did not know how to find him. Fortunately, the Principal found a student who knew where Francis lived. It turned out to be very close to where we were and the Principal kindly allowed the student to show us where he lived. We were thus reunited.

Back to the hotel then where Abdoulie, Yankuba, Pippa and I spent a fruitful hour and a half putting together some microscopy kits for workshops in schools to be delivered by Wandifa, Yankuba and Abdoulie 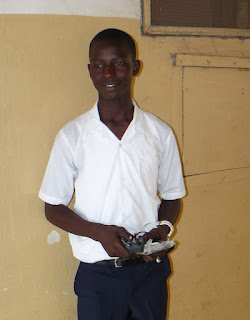 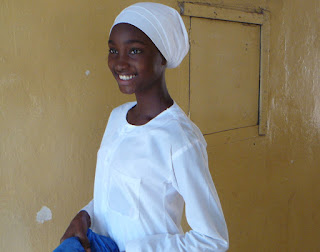 Mohammed and Kaddy receiving their prizes