Day 16 - Thursday
Upcountry today. It is a long drive and we left the hotel at 5.30 with a packed breakfast (thanks to the kitchen staff for this). During the day we heard that Mo Lamin has been discharged from hospital. We were all pleased to hear this.

Once you get beyond Brikama the road is very good, a new highway that is every bit as good, or indeed better than your average British ‘A’ road. We made good progress only being slowed down by the numerous police, army or immigration checkpoints, but they were all in a good mood today.

We arrived in good time at Soma, our main destination., Our first school was Misera Basic Cycle, just out of Soma. It is right next to the border with Senegal, so close that I think if one of the students there had given one of the footballs we had brought a really good welly it would have landed in Senegal!

We were greeted by the principal, Mr Modou S Faye. We were soon dignified by the presence of two pillars of the community, the village imam and the village chief. All three are delightful and enthusiastic people. We were there to give the school some money to build a fence around the school (we would call it a wall). The fence serves not only to protect the children, but also to keep out people and the goats, sheep, cows and oxen that wander about
.
We also had brought over the first two of many holdalls containing sports kit donated by Haslemere Prep School when it closed. Each holdall contained a full kit of 12 football shirts, shorts and socks, along with 2 match balls and 2 practice balls. 12 eager young students were called for to try them on.

The school also has a large garden so we were able to give them a selection of seeds donated my Manor Green school.

After that we were entertained by Grade 9 girls with a traditional song and dance and some readings and a poem from senior students.

Misera school is in a Fula village.We don’t often go to Fula villages and we think that it is very important that we keep touch with villages such as this which are some way off our “regular” area.

We then went to Kani Kunda LBS where we met with the principal, Sainabou Sonka and were joined by two members of the School Management Committee, both called Saidykhan – we were in Wandifa’s home village. We discussed the proposal for the sinking of the borehole by The Water Point mentioned in an earlier blog. They are very keen for the project to proceed. One issue we will need to address is that they would like 7 or 8 standpipes running off the tank, but the estimate only provides for 5. We will see what we can negotiate.

We also had a look at some of the furniture delivered to the school from the last container and how it is being used.

To Wandifa’s sister, Wonto Saidykhan’s compound next for a chat, some freshly picked groundnuts and bananas ripe from the tree. For those who have never eaten a fresh ripe banana, they really are sweeter and juicier than those that have been transported from the tropics and ripened in the UK before being delivered to supermarkets.

A brief visit to Pakalanding UBS to pay some sponsorship fees and look at how the furniture delivered was being used and then to our final call in Soma, the Soma Health Centre where we were very pleased to donate some baby clothes. Included were some very small hand-knitted baby hats suitable for premature babies, some hand-knitted jackets and more conventional clothes such as baby-grows.

On the drive back we made a short diversion for refreshments at Tendabar Nature Reserve. Whilst there Yankuba spotted that the printed menu had a photograph with Pippa in it taken on an earlier visit some years back. I will try and publish that when I get back to the UK – it needs some enhancement.

The long drive back went smoothly until we reached Brikama when we had to join the usual smog-filled traffic jam from there back to the hotel.

An excellent day out. For those who visit the Gambia and haven’t been there, I heartily recommend going there. It is just so pleasantly different from the “usual” areas. 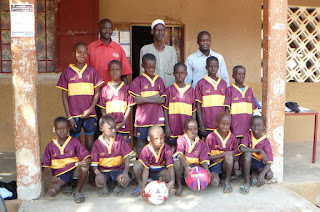 The football kit with the principal, vice principal and the village leader 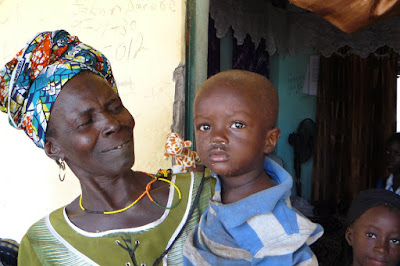