We visited Wandifa’s and Abdoulie’s compounds. This is the first time we have seen Wandifa’s new family house that he spent nearly three years building. We last saw it in February when it was obviously near completion and now Wandifa and his family have moved in. It certainly is a great building with plenty of land around. Wandifa is quite rightly very proud of it. There is a picture of it below and we will post some more when we get back to the UK

In pride of place in the garden is the orange tree planted in memory of Ian on the day of his funeral and over the coming years we shall watch to see it grow and bear fruit (which Wandifa tells me should be in about 3 years).

We sat in the garden, chatted and played with the children and then went over to Abdoulie’s compound for a very enjoyable time, again just chatting and admiring the garden.

Back to Wandifa’s where Mariama had prepared and cooked for us the most wonderful lunch. A chicken benachin with chicken (obviously), rice and many different vegetables including, in our honour, ordinary “British” potatoes – something of a rarity in The Gambia unless served up as chips in a restaurant. We all sat down together to eat this splendid meal.

Feeling quite full, we then returned to the hotel. Our grateful thanks to Wandifa, Abdoulie and their families for their hospitality. 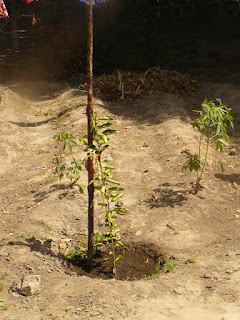 The orange tree planted in memory of Ian 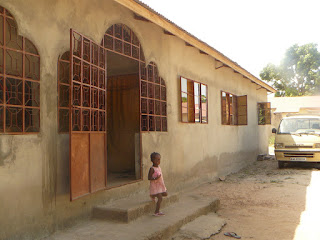 The outside of Wandifa’s new house

A day visiting schools and compounds, mostly to pay fees and meet newly sponsored students, who get presented with a filled pencil case and have their photos taken for their sponsor.

Firstly, to SOS Senior Secondary School to pay fees. This used to be a straightforward job of handing over the right amount of cash and getting a receipt. It took about 10 – 15 minutes. It’s now a bit more time-consuming. You get an invoice and have to go to a specified bank and pay the cash over, get the receipt and return to the school with it. We also wanted to pay our sponsored student’s exam fees which are payable separately. To do this you have to go to a bank (a different bank, of course), pay the fee, in return for which you get a scratch-card, which you take back to the school, where its number is used to confirm payment of the student’s exam fees. It took about an hour and a half in total.

On then to the exquisitely named Mrs Bucket’s Afrikanaria’s Nursery School. Yes, really! The Headteacher named it because she was a great fan of the well-known sit-com “Keeping up Appearances” and its star Patricia Routledge. We went there to meet a newly-sponsored student.

The Head is a delightfully enthusiastic and dynamic person and we would like to be able to help the school. The most pressing problem is that in one corner of the school playground there is a dump for scrapped parts of cars – doors, bonnets etc which is not properly fenced-off. This is a real danger to the children as well as an eyesore.

A couple more visits, then back to the hotel 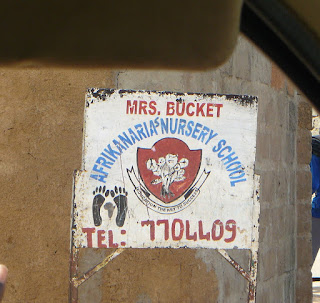