After a restful sleep we set off a little later than hoped as Wandifa had to take someone to hospital. I then exacerbated the situation by leaving some documents I needed in the hotel so we returned for them.

We drove to Kotakula Nursery and Lower Basic school where we met with Ebrima the school’s administrator.  We had been asked to help with the maintenance and additions to their solar power installations. We had received a quote which was for a considerable amount of money. The school was already connected to mains electricity and we couldn’t see that there would be sufficient financial benefit to the school for the outlay requested. After discussion Ebrima thought that he could take a more modest proposal to the school’s management committee to extend the existing wiring into the classrooms to provide power for lighting and computers. We then had a look round work recently completed from PAGEANT funding including tiling and installing suspended ceilings.
The school has some well-maintained playground equipment and Yankuba and Abdoulie couldn’t resist… 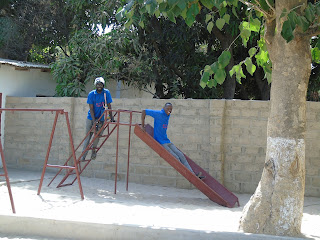 On then to a school PAGEANT had not been to before, Hope Daycare and Basic Cycle school. We went there as one of our sponsored students had moved there from Kings Kids Academy and we met her and her father there. The school is currently extending its premises so the school looked a bit too much like a building site.
We dropped in on Faks, proprietor of Humanity Nursery School whose day job is head of the Automotive Engineering Department at Gambia Technical Training Institute (GTTI). We arranged to visit him at Humanity next week.
As it was Friday, the schools finished early so we returned to the hotel. Pippa and Wandifa sorted out some money, then it was rest and relaxation for the rest of the afternoon. This evening we are meeting Linda and going to Mama’s Restaurant where they do an excellent seafood buffet.
Tomorrow is Independence Day and is also to be the inauguration in The Gambia of President Adama Barrow. Abdoulie and Yankuba are getting up early to go, but it will be very crowded. We are planning to stay at the hotel and sort out the kit for the microscopy workshops next week.