We got up at 5.00am and left the hotel without breakfast at 5.40. We arrived at the port at 6.10 just in time to see the ferry pulling away from the ramp. You can imagine our feelings!
There are two ferries that cross the river and we could see signs of activity on the other one. About an hour later it left its moorings and came to the loading bay. We expected to get on straight away but were disappointed. The ferry had engine problems and needed some spare parts fitted. Finally at 8.10 we left- two hours after we had arrived.
Our taxi was waiting for us at Barra. It was relatively intact for a north bank cab. Nevertheless the journey was not uneventful as we had a blowout needing a wheel change. While the wheel was being changed Kathy saw a monkey by the roadside.
Our first visit was to Albreda LBS to meet the head teacher Fafa Jobe, where we inspected two recently completed PAGEANT projects. These were completion of a wall around the school grounds and installation of windows to the staff quarters. Albreda LBS is so remote the teachers have to live on site.
We agreed to fund a new project there – tiling of the staff quarters. We gave the school a First Aid kit with refills funded as an ethical gift from a PAGEANT member and a complete set of football shirts and shorts donated by Haslemere Prep School. We had also brought with us a couple of footballs for the school 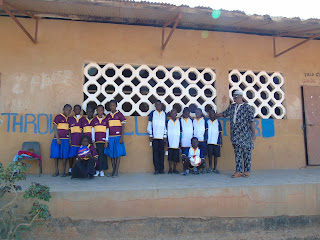 As we had been up now for 6 hours without anything to eat we went to a nearby café which is part of the Kunta Kinte “complex”, for some welcome omelettes and chips.
On then to Bakary Saidykhan’s compound. Bakary is Wandifa’s elder brother. Kathy and I sponsor one of Bakary’s sons who is now in Grade 12 and we visited him at school on our way back.
We concluded our visit to the north bank by stopping off at a school and compound  en route to the ferry.