A late departure as the van wouldn’t start. Jereh picked us up and then Wandifa and Yankuba (Abdoulie stayed to fix the van), we didn’t have much planned for the day, however.
We drove to Banjul where we dropped Pippa and Yankuba off at the bank to sort out Pageant’s internet access.

Kathy, Wandifa and I went to Unity nursery to see the work carried out to convert and make good two new classrooms. They had done a fine job in tiling, installing a suspended ceiling and electrics including ceiling fans. This really is a first class school and we were able to agree to make a further payment to allow the next project to proceed- work on the outside walls and tiling. 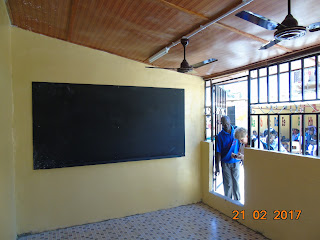 We were entertained by some singing by the children before leaving to pick up Pippa and Yankuba.


On the way back we stopped at Timbookto, a bookshop, to make a few purchases. Then we went back to the hotel for an afternoon by the pool.