A new experience for us all today, but more of that later!
We had decided to go up country to visit schools in villages around Soma, and also to visit Wandifa’s sister, Wontu.
Soma is about 2.5 hours’ drive with good traffic and for the most part is a very good road. We made good time despite many stops at police checkpoints.

We went first to Misera upper basic school which is right next to the Senegal border and you could just walk across the field to the country. When we arrived the head was out visiting the regional office. On hearing we were here he quickly came back on his motorcycle that some teachers in the remote parts can buy at a subsidised rate. Misera is a lovely school and we inspected the perimeter wall we were paying for. They needed some more funding to complete the wall and will provide us with an estimate. The wall is made of concrete blocks which are made onsite using a mould. Three brickmakers using one mould have already made 3,000 blocks which have been incorporated or were ready to go. 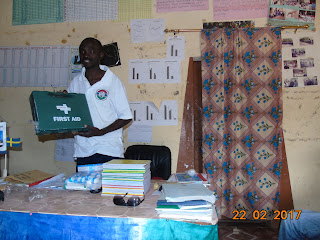 We gave the school ethical gifts of a first aid box and refills and some exercise books. Then we had a look at the school garden which is in very good shape. We had supplied some seeds to them back in November.

On then to Kani Kunda LBS school to look at the water installation we had agreed to in November and has now been completed and paid for.
The contractors have done a fine job and the tower and storage tank can be seen below. There are 7 standpipes with taps dotted around the playground and gardens 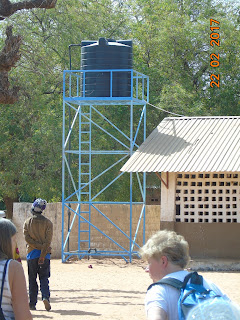 The head is delighted with this and an added bonus is that the school has sufficient water to enable the local community to use the facility.
On the downside, the school has been funded to build a perimeter wall. The first funding was made by a Pageant member a number of years ago and the wall is nowhere near complete. There are made concrete blocks lying around becoming broken. We reluctantly told the head we could not fund any more projects there until the wall was completed.
On then to visit Wandifa’s sister, Wontu at her compound. We had some presents for her and also some ethical gifts donated by Pageant members. These were some cooking pots and pans given to a newly-wed couple setting up home, and some mosquito nets and some school bags. We also gave the mother of a new born baby a quilt handmade by Doreen, a Pageant member.
Our final school visit was to Pakalinding school. We had some Haslemere Prep School football shirts and shorts to give them along with some footballs. They have a girls’ team and a boys’ team and the schools’ competition was about to start, so very timely. We also gave some exercise books provided as an ethical gift.
This school has mains water but the storage tank was leaking and was not sufficient for the children and the school vegetable garden. We agreed that they will provide us with an estimate for a new tank and tower and some additional standpipes for us to consider funding.
We then set off back to the hotel stopping off at Tendaba bird watching reserve for refreshments. About 10 minutes after leaving there the engine in the van cut out and we stopped by the side of the road in the middle of nowhere. It was about 5pm and still very hot with no shelter from the sun. All attempts to restart including trying to push start the van failed. We phoned Faks who would send out a car but he was about 2 hours away.
After about half an hour we hailed a passing bush taxi which was able to fit us in and the driver insisted on towing our van.
Abdoulie gave a hero’s performance in steering and braking the towed van for about 2.5 hours (about 120 Km), especially as the tow rope was very short (less than 2 metres).
The van was dropped off at a garage in Farato and we were given a lift back to the hotel by Lamin, a friend of Faks. We arrived back at the hotel at about 8.45 having left that morning at 6.00 am. We quickly washed our hands and faces before rushing in to a late dinner. Never has a Jul Bru been more welcome!