Day 10 At the airport (and other things)

Pippa and I started the day by driving to Brikama. We went to Brikama UBS to see Mo Lamin, who is not a Pageant student but is sponsored by a pastor in the USA. He had been asked for a considerable amount of money for materials, books and extra tuition. We were able to get this information and leave him with a maths set and calculator.

To Gambia College to continue our arrangements for the science workshops in February. We left a number of microscopes that had come over on the container in storage there. Nakalang was unable to confirm that one of the days we wanted was available but is confident that it will be. We were also able to agree the price of the breakfast and lunch for the two workshop days with Madam Touray, so there will be no misunderstanding on the day.

We continued to Anne Marie Rivier BCS to see 4 children and give one of them a present from his sponsor. That school certainly seems to have very good facilities compared to others 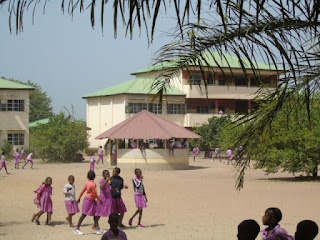 This was followed by our second visit to Brikama Nema School, which had been a recipient of a considerable amount of stuff from the container and we were pleased to see it already being put to good use. The schools had received football jerseys and shorts from Haslemere Prep School and we were treated to a display of children in the kit. 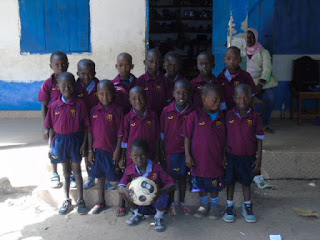 In sports gear at Brikama Nema

In a previous blog we wrote about the toilets that had been constructed there. Some were currently unused as they had not been tiled and the school did not have the money to do that so we asked them to provide us with two estimates for tiling the floors and one tile course around the wall. We asked for estimates for using broken tiles, which would produce a mosaic effect on the floor and for complete tiles. 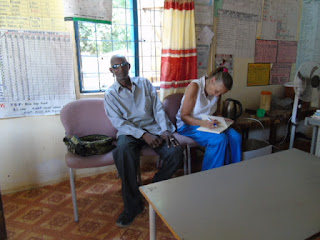 The deputy head and Pippa trying out chairs from the container

Lunch was then provided which we were not expecting. We ate what the children had, which we think is called yankadamg. This is a dish that neither Pippa nor I had had before. It consists of steamed rice to which ground peanut flour is added along with small amounts of smoked dried fish and vegetables. It is quite a dry dish, but very tasty.

It was time then to go to the airport to meet Tom, Isaac and Yun Shin from Christ’s Hospital School. We arrived a few minutes before the plane was due and soon discovered it was expected to be two hours late.😓 Normally we would have checked this at the hotel in the morning, but a lack of internet prevented us from doing that. We used the time to go to Yundum Barracks Schools (where Tom, Isaac and Yun Shin will be going tomorrow) to discuss our plans for providing them with some furniture for some of their lower basic classes. We left them with our ideas and returned to the airport to successfully pick them up.😃 Once again Thomas Cook had to divert to the Canaries to refuel

Back to the hotel. The boys were very hungry as they had not had a proper meal for many hours. An extended power cut at the hotel meant that we decided to walk into go to Luigi’s where the boys enjoyed a large pizza.