Yun Shin, Isaac and Tom, along with Yankuba, Abdoulie, Wandifa, Pippa and I drove to the Yundum Barracks Schools where the boys were going to spend the day helping and doing some sporting activities with the children there. They will also be going on the following Wednesday.

When we arrived we had to report to the MPs there and I was told by the officer that I looked like Boris Johnson! Oh dear!
The boys were going to start with some drawing with the younger children and had brought materials with them. We left them there and had decided to go and buy some chairs which would be suitable for younger children at that school, to go with the tables we were having constructed, and had seen some outside a shop in Serrekunda a couple of days ago. On that day we had stopped and Yankuba and Abdoulie had talked to the owner and established they had about 100 and he would let us have them for GMD40 each. That is about £6.45 each

We had decided to buy them all and hoped we could get a bulk discount. When we got to the shop it was closed. We rang the number on the door and the owner said he normally does not on on Fridays but would open it especially for us and asked that we came back in about two hours. We went back to the hotel and picked up Carol and Regina, then back to the shop.

We were disappointed. The owner had upped the price to GMD50 per chair and would not budge so we walked away. Thinking caps were put on as we drove to the school and Pippa had the idea for getting a price from the carpenter who will be making the tables to also make some 2-seater benches for the children to sit on. That would enable us to still sit 10 children around each table. We will run this past the school.

When we got to the school a large number of children were on the school field playing rugby, a game which is almost completely unknown in The Gambia. They soon stopped as it was time for Friday prayers and the boys told us that many of the children had difficulty in the concept of passing the ball backwards whilst running forwards! 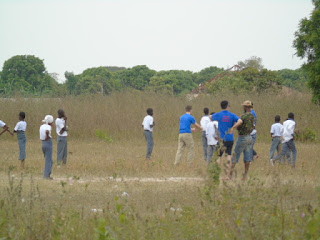 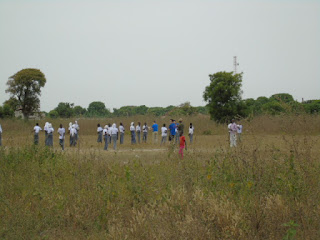 We left them to it and went to see Fansu who is liaising with the carpenter and explained our ideas to him and got a price for the tables and benches which we thought was satisfactory. Whilst we were there, the Deputy Head from Brikama Nema School came with his estimate for the tiling. It was not what we had asked for so he will redo.

Back to the school for final time where rugby was still in full flow. When the school bell rang for the close of the day the children slowly and reluctantly left the field. The boys said they had had a great and rewarding time and thoroughly enjoyed themselves. They have agreed to write a short account of their time in Gambian schools and I will post it here.