We assembled in the hotel lobby at 5.30 am to set off. We had two cars today. Abdoulie, Yankuba Tom, Isaac and Yun set off in the Pageant van, while Wandifa, Pippa and I went in the other car with Jerreh driving.

Upcountry in The Gambia is so very different from the urban conurbations of Banjul, Serrekunda, Brikama and the other villages that make up the coastal strip. It is quiet, peaceful and very very rural. It is also considerably poorer even by Gambian standards.

We made good progress as the road to Brikama is quiet that early in the morning. After Brikama the road is very good for the next 150Km or so, so we sped along stopping only for the numerous police and army checkpoints, but there were even fewer of those than last year and none detained us for long.

We arrived at Misera BCS shortly after 8.00 having made a brief stop to check out the scout lodge where Isaac, Yun and Tom will be spending the night. We were met by Mr Faye, the principal who was delighted to see us. He gave us a tour of the school and we were able to see the completed fence (what we call a wall) that Pageant had funded. It is a very impressive structure and Mr Faye has plans for it – more of that later. We were able to see some of the furniture that had come over in the container in the school library. The library there is well-structured and more importantly seems well used. Mr Faye considers it to be the best library in the province. We had also given some bundles of clothes for distribution to the local community. 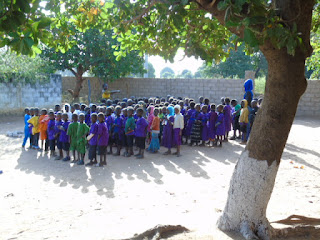 Part of the school wall which may be decorated, with children singing 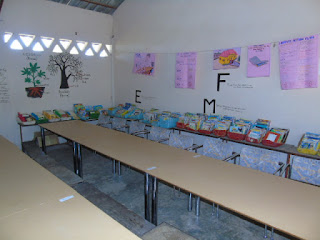 The school was also currently experiencing a crisis with its water then. It has two wells. The pumping mechanism (hand-pumping) in the large one is broken beyond repair, and a person or persons unknown had dropped an engine in the other one. Why someone would sink so low as to do that is beyond me. However, a new borehole has been sunk in the village which is only a couple of hundred metres away. The school will have access to that and the pipework has been laid. They are only waiting for the connections to be made. We heard later in the day that those connections were made shortly after we left so they now have water; good news there.

Tom, Isaac and Yun then left us to start their two days of helping out generally in the school. We are hoping they will be providing a report of what they did which I will post here. Pippa and I  discussed some possible projects with the principal. He would like to render and paint the school’s perimeter wall. There would be pictures and teaching aids painted on the wall. The school has a talented art teacher who could organise  the painting. He would also like to provide a secure area with shelter for the food vendors who come to the school. Mr Faye will provide some estimates for both of those.

We then suggested a possible project. The idea is to create a new building for use by the school on Mondays – Fridays and by the local community at the weekend. The building would be put to use as a skills centre. We envisage it consisting of workshops for woodwork, metalwork and home science. It would be accessible from inside the perimeter wall by the school community and outside the wall by the local community. Mr Faye very much liked the idea and we asked for a detailed drawing of what he would like together with a reliable estimate.

We moved on then to Kani Kunda for a brief visit to Wontu who is Wandifa’s sister. We arrived at a nice quiet compound, but within milliseconds numerous children of differing sizes and ages materialised. Pippa had brought some parcels for the women’s club there, mainly of clothing, bedding and towels and she also had some shorts and dresses hand-made by Esther, a Pageant member. These were highly appreciated and unexpectedly orderly queues of girls formed to be given a dress of the right size. We handed out some small presents to eager children and then said our farewells, departing for Soma Health Centre, where we met a doctor named Amadou and gave some items to be used in the hospital as they see fit, and including some things for the baby care unit. 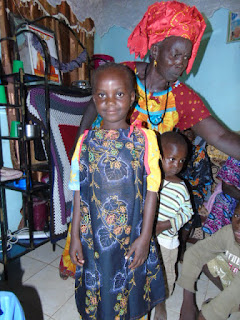 Trying on dresses, Wontu in the background 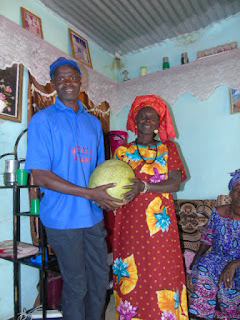 On to Pakalinding UBS where we had funded a project to provide a new water tank and four standpipes situated around the school grounds. The school has mains water which is metered but often has no supply as it as at the end of the line from the pumping station. The system will enable the tank to be filled when demand from other users is low. 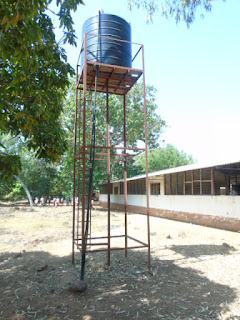 Part of the water installation

Back in the UK we had agreed to fund the refurbishment of the staff room which is in a total state of disrepair. We handed over a payment of one-half of the estimate with balance to be paid when it appeared the work was progressing well. 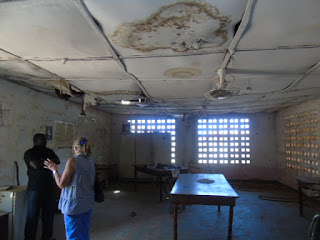 The state of the school’s grounds is somewhat shambolic and we suggested that tidying them up would help the children to have pride in their school. The school also received quite a lot of furniture from the container that has been put in store, some of it is destined to go in the staff room, but we said that most should be used for the children. We would like to see these when we next visit.
We had a tour of the school. Most noticeable was that the school had proper workshops for woodwork, metalwork and home science, but these were hardly being used for practical work and these subjects were being taught theoretically. This may be partly because what little tools and equipment they have is very old and worn-out. The school also has some microscopes donated by Pageant. A teacher was able to show us some photos of them being used, but we would like to hear of them being used more.

We gave a bicycle along with the essential padlock and pump to a Pageant student, Nfamera which was paid for by his sponsor and then went to his family compound nearby. We had some mosquito nets and garden implements from the ethical gifts programme which we wanted to give to an upcountry family where there is greater need for them, but we have only a few sponsored children who live up there.

We set off back to the hotel speeding along the main road stopping only at a local tourist attraction for a drink and a bite to eat. The first part of the journey was very quick, but then we hit the interminable traffic jam that spreads along in the Banjul direction from Brikama so we fumed our way slowly along it arriving back at the hotel just after 7.00.  A quick shower followed, then down to a nearby restaurant. It was David and Regina’s last evening here. A good fillet steak, peppercorn sauce and chips was a popular choice!