Yun, Tom and Isaac set off with Jerreh shortly after 9.00 to go for their second visit to Yundum Barracks Schools. Shortly after them Carol, Pippa and I with Wandifa, Abdoulie and Yankuba set off in the opposite direction towards Banjul.

Our first port of call was to Banjul Hospital to give them parcels of very small woollen hats and blankets for neonatal and very young babies. The staff were very grateful for these.

On then to Wesleyan LBS in Banjul. We had told the principal that we had agreed to fund their project for hard-standing for a catering area. She was delighted and we gave her the money to carry out the project.

St Augustine’s SSS was our next stop. That was where our container had been unpacked almost two weeks ago. We had left with them some modular shelving units that had been disassembled in Leatherhead and shipped over. St Augustine’s was the lucky recipient, mainly because the frames were so heavy that it would have been nigh on impossible to take them anywhere else. The shelving now had to be reassembled but we had no instructions and its assembly was not particularly intuitive. With the aid of photos taken as the shelving was disassembled we could work out how to do it and showed staff at the school the method. We did a small section and then left the rest in the capable hands of the staff. 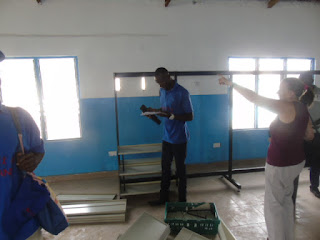 We then headed out of Banjul and stopped off at St Therese’s Lower and Upper Basic Schools to see a couple of children who were sponsored and one who wanted to be.

Heading now towards Yundum which is where the barracks schools are, we picked up our carpenter’s liaison, Fansu and then returned to those schools. We are having made some tables and benches for the lower basic school there. We know what size table top and bench tops we want, but not the height. We all discussed this at some length and agreed on the height suitable for a G2 or G3 class. After leaving we gave Fansu the money to get the work done; he thinks it will take two weeks.

Tom Isaac and Yun had not finished at the school, so we drove a few kilometres down the road to Kings Kid Academy in Lamin village. We were hoping to see our old friend Bishop Dennis but he was in Senegal, so we spoke with the new Headteacher who started in September. We knew he had a project to create six new classrooms on two levels and we were given a very professional document including architect’s plans and estimates to take away and consider.

Back then for the final time to the barracks schools to pick up Isaac, Tom and Yun who were still playing rugby with delighted children at that time. They said they had had a great time there. 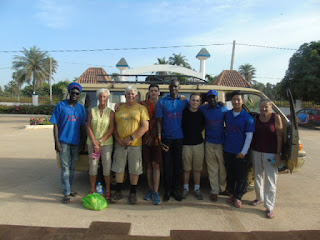