We left the hotel at about 9.45 heading for Humanity Nursery School in Farato. We had planned to meet Faks the owner there and hand over the first stage payment for his project to create a multi-use area which could be used as a canteen and kitchen as well as being used for other activities.

Unfortunately he had called earlier to say that he now had a meeting at GTTI, where he is head of automotive engineering, which he couldn’t get out of. Nevertheless we met Ebrima, the Headteacher there who showed us around and led a great singing performance from the children.We also saw the canopy that had been erected by means of a Pageant project. It is very impressive.and provides valuable shelter.

Humanity Nursery caters for special needs children, but as they don’t attend every day there were none at the school today. We would still like to discuss their individual needs because we would like to help with any materials etc. that may be of use. 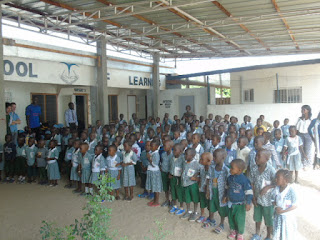 Children singing at Humanity Nursery under the new canopy

After that we went to Faks’s farm which is on the original site of Humanity Nursery. We were shown his 800 or so laying hens the five turkeys he is rearing. All profits from the sale of eggs are ploughed back into the nursery.

Our final visit to Yundum Barracks schools followed. We had brought over many bags of school uniforms from Haslemere Prep School. Included were a large number of grey school shorts. Somewhat surprisingly it seems that very few schools have grey shorts as part of their uniform, but Yundum Barracks schools do. They were delighted to have them. They will be suitable mostly for their lower basic grades. We also had with us some beige shirts, pullovers and socks, which may be of use. They were delighted with these. We had only brought 3 bags with us. We have many more.

On then to the airport which is nearby. Tom Isaac and Yun were flying home today. Ann and Brian were arriving on the inbound flight, which were pleased to hear was more or less on time. After refreshments we said our farewells to the boys. They have enjoyed themselves immensely and have contributed a great deal to the schools they have visited. We welcomed Ann and Brian and then returned to the hotel.