Carol had arrived from the UK late the night before and we were all pleased to see her.
Pippa, Carol, Mo, Regina and I along with Abdoulie Yankuba and Wandifa set off to Brikama today which is about 30 minutes drive away.

We stopped first at a compound to collect a missing report and pay some fees to a sponsored student. The report should have been delivered at the end of the summer term and we wanted to stress the importance of delivering the report on time so that Wandifa Abdoulie and Yankuba do not have to waste their valuable time chasing these up
On then to Gambia College to see Nakalang Ceesay who is head of science. In February 2018 we will be holding the usual workshops for trainee teachers and may also do other science subjects depending on who comes over. We were there to discuss the days for those workshops and also to discuss the catering arrangements with Madame Touray. At the workshops we give all those attending breakfast and a hot cooked lunch. We wanted to avoid the problems we had in February this year over the pricing. We had thought the price quoted was for the whole two days the workshops run, whereas in fact the price we had been quoted was per day.

We then went to Longman Memorial Methodist School to look for a particular student we thought was there (she was) and then on to Brikama Nema LBS and EDC school.
We had sponsored and paid for the provision of new toilets for the children there. We were disappointed that the work had not been completed as the boys’ toilets had not been tiled and some of the money we had paid for the provision of children’s toilets had been spent on providing new toilets and a shower for the staff. The school said that those had been in the estimate supplied to us but were unable to find the documentation then. We had not brought the paperwork over from the UK, so will need to resolve this when we get home. We had hoped to fund new projects at that school, but these will have to be reconsidered in light of this.

We then went on to Yundum army barracks which is near the airport. In the barracks there is a nursery school, a Lower Basic and an Upper Basic. Until last year we had not even known there was a school on that site. It caters for both children of army personnel and from the local community.

Our primary reason for going there was to see if they could accommodate the three students coming over from Christ’s Hospital School for a couple of days doing a variety of activities with the children. They will be delighted to do so. We were also treated to an extended tour of the school. From what we saw the school seems to have an excellent ethos and is getting very good results. The teachers are very inspiring and the children seem to learn well. However they are desperately short of equipment etc. and we have earmarked this school as one we may well wish to help in the future

Back then to the hotel. Here is a picture of Mo in playful mode, with Carol in the background.
Tomorrow we hope the container will get out of the port and that we will have the fun of unloading and distributing its contents. 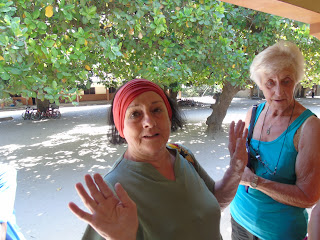 Mo in playful mode. Carol i  the background