The headline above is a very short description of a very full day.

We headed off to Banjul at a reasonable time not knowing at what time, if at all the container would get out of the port to go to St Augustine’s SSS to be unloaded. While we were waiting for news we went to Wesley LBS in Banjul. The Headteacher there was quite impressive The school was currently undertaking some renovation and restoration work on some classroom furniture involving repairing where possible and applying fresh varnish. We saw the possibility of a project there. The school would like some new hard-standing between two classroom blocks to provide a dining area. Metal-legged table would be embedded in the concrete. We would like to consider funding this and asked for a detailed estimate.

On then for a very brief visit to the delightful Unity Nursery School (see Unity Nursery page), where, as ever we were entertained by the children singing.

It was approaching noon, and we hoped the container was nearly ready to be dispatched. We went for refreshments at Timeless (formerly Billy’s), whilst Abdoulie and Yankuba went to the port to drop off Wandifa. After a while, Wandifa told us that the container was on a truck and second in the queue to be checked by customs after which it could go. We thought that would take about an hour so ordered lunch. Within 10 minutes of ordering we had a call to say it had cleared and was on its way. We quickly changed our order from eat-in to takeaway and went off to the school.

Unpacking had already started and everyone worked extremely hard. Yankuba especially worked his socks of working inside the container getting the equipment to the loading point where is was handed to others to sort. Every item was labelled with its destination and very soon a number of discrete piles of furniture and packages were formed – one for each school. The whole unloading operation took one and a half hours (compared with 3.5 hours to load it).

Whilst and after the unloading was taking place schools started to arrive with a variety of means of transport: trailer, truck, taxi and private car. In most cases these were crammed to the gills before leaving. Items for remote upcountry areas were being stored at the school and there was one school, which despite having been given plenty of notice had been unable to organise transport. We therefore had to reluctantly tell that school that we would have to give those items to another school. We telephoned the Yundum Barracks schools who were delighted to accept these and said they would immediately send an army truck.

We then loaded the Pageant van with items for distribution later and headed back to the hotel. Tired, but satisfied with a job well done.

Here are a few photos of the day. We will compile a fuller report with some more pictures when we get back to the UK. 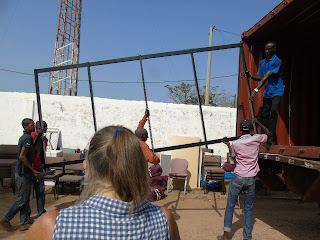 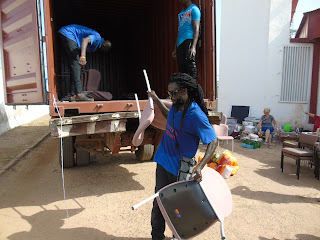 Yankuba (in van) and Abdoulie unloading - almost there! 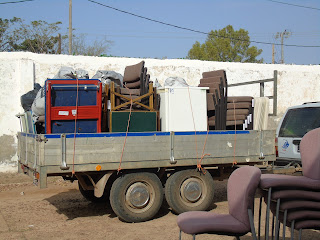 Trailer neatly packed for Humanity Nursery and other nearby schools 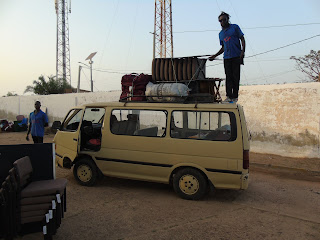 The Pageant van/minibus fully loaded. Abdoulie on top |of things (as ever!)