As it was Mo’s last day we made separate morning and afternoon trips from the hotel.
In the morning we went to Nusrat SSS where we have a number of sponsored children. We spoke at some length with the principal who seems very able and has a very dry witty sense of humour. We met with all our students who were there that day, but we were especially pleased to meet Ancha who achieved the best possible results in her Grade 9 tests. An “Excellent” in all subjects and we have heard that she got the best results of anyone in The Gambia. Congratulations indeed to her and Pippa presented her with a prize in recognition of her success.

We also met with Muhammed who is an amputee. Muhammed is not a Pageant sponsored student; he is sponsored by another UK charity called Legs4Africa who are helping him with his education. They wanted to have details of the fees, if any and other costs as they have little experience of The Gambian education system. We were able to get the information they need from him and the principal.

We then returned to the hotel to say our farewells to Mo. She has been great over here and we will miss her. Pippa also took this opportunity to speak to Jerreh whom we will need as a second cab driver for a few days. When the students from Christ’s Hospital are over they will be doing different things from us and we are also planning to go upcountry to Misera BCS with them. We will leave them there overnight with Abdoulie and possible Yankuba so they can have two full days there. The rest of us will return on the same day with Jerreh.

Out again for the afternoon. We started at the Gambian Technical Training Institute (GTTI) to see Faks. Faks is a very able entrepreneur. As well as his daytime role as Head of Automotive Engineering at GTTI, he is also the proprietor of Humanity Nursery and has over 800 egg-laying hens. He is also raising some turkeys, presumably for Christmas. He ploughs the profits from the egg-laying back into the nursery school. 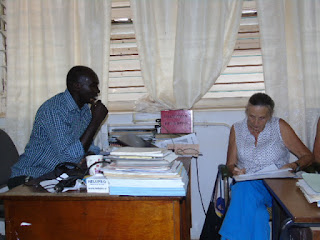 We were there for a couple of things. Pageant has a number of sponsored students at GTTI. There were some fees to sort out which we duly did. We have also agreed to fund a project at Humanity Nursery. Faks wants to build a multi-purpose hall there. As the name suggested it will be used for a variety of purposes, but principally Faks wants a secure area where the food for the children’s midday meal can be prepared and eaten.  We arranged with him to go and see him at the nursery next week when we can give him the first instalment of the money.

We finished our day at the SOS Lower Basic School which is situated in the Hermann Gmeiner children’s village, which is an Austrian charitable foundation with children’s villages worldwide. It used to run the schools there but has withdrawn from that aspect. We were there to see briefly Amie who is David and Regina’s sponsored child and some other Pageant sponsored children there.