Fafa Jobe the Headteacher from Albreda LBS was coming over from the North Bank to see us. He was bringing with him some estimates for the projects we had agreed to when we went and saw him. We met him in Westfield where he had already bought a toilet, cistern and hand basin together with some pipework to be used in the staff toilets that were to be built. When we have finished we will drive him to Banjul port where he will engage a porter with a barrow to load these onto the ferry. At the other end they will be wheeled of to Fafa’s car.

We went for refreshments at Timeless and discussed the projects. We gave him the money for the first project which will be running water to the kitchen along with a sink and worktop. It was only then that we realised that whilst Fafa had bought the toilets he had forgotten the kitchen sink (sic). When that is finished we will get the money for the second project (staff toilets) to him. By then the new head will be in place and we will get a smaller project to carry out under him before embarking on the largest of the projects – the conversion of the derelict kitchen to female staff quarters.

Abdoulie then drove Fafa to the port whilst Pippa, Regina, Carol, Wandifa and I went to Albert Market in Banjul. Yankuba had gone out for the day with Isaac, Yun and Tom to do some touristy things with Jerreh driving them. We were at the market for two reasons. Pippa was buying some small carved wooden animals to take back to the UK and sell at school craft fairs to children at pocket money prices. There were protracted negotiations over how much we should pay, but eventually a fair price was agreed. We were also buying some mosquito nets from some money raised in our ethical gifts programme. We were able to buy 12 which will give great protection to some upcountry families.

We started the return to the hotel but stopped off at the Atlantic Hotel in Banjul which was regularly used by Pageant members in The Gambia until it closed in December 2015. It has undergone some refurbishment since and was due to reopen on 1 November 2017 but the opening was then put back to 1 December. We had a look round, mainly for old times’ sake. All the bedrooms and bathrooms have new furniture and fittings and the place has been given a lick of paint, but other than that it hasn’t changed much. There still seemed quite a bit of work to do, and we doubted that it would be ready in what was then 12 days’ time. 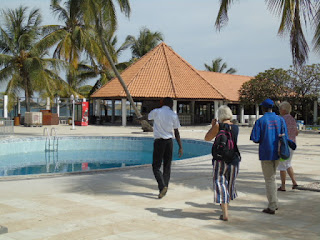 Nostalgia corner. Regina, Wandifa and Carol being shown round 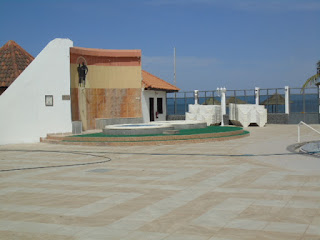 A short day. Pippa and I with Wandifa and Abdoulie visited Ebrima and Fatou in their compound. Ebrima and Fatou were both sponsored by our family when they were at school even though they are now adults. Indeed, they were two of the first  children to be sponsored by Pageant. We enjoyed chatting with them. Ebrima is the compound’s gardener and he told us of his plans to improve the garden. We were able to give him some seeds donated by Manor Green Primary School in Crawley.

After that we went to buy a bicycle for a student whose lives upcountry. His sponsor, Alison had asked us to buy him one. Negotiations were successfully concluded and the bike, with a sturdy lock and a pump were loaded onto the van.

Back to the hotel early. Abdoulie was taking the car to be serviced in the afternoon. He wanted it to be in tip-top condition for our long drive to Soma and beyond tomorrow (we are leaving at 5.30)