On Sunday we had a late start as we were all tired after two long days doing the workshops. We had planned to visit Yankuba and Fatou at their house to give them a wedding present and then we were invited to lunch at Fatou Lisa Janneh's family compound where Alaghie lives. He is the recipient of the Ian Howard memorial award and is a bright and engaging young boy.

The day was very hot with a strong wind. The weather has been cold for the time of year, by Gambian standards, with strong winds and often days with cloud and even some light rain. It was good to sit inside out of the sun today however, which seems odd as it is lovely to see such sunshine in February. We see that the weather in the UK is quite cold and are not looking forward to that at all!
Before leaving the hotel we brought the blog up to date and Pippa and Kathy looked through the list of student teachers attending the workshop to decide who should have the microscope kits when they go out teaching.

So firstly, to Yankuba and Fatou. We had bought them some cooking pots and dishes and personal gifts which they really appreciated. We had also bought two iced fruit cakes and made a tier with a wedding topper for them to cut the “wedding” cake, explaining that it was traditional in the UK. A photo of the happy couple is below. 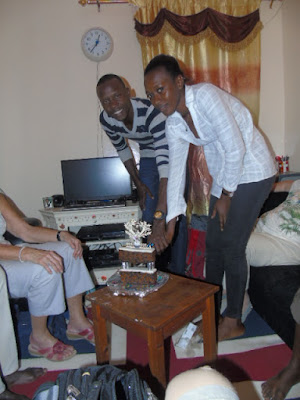 We then drove to Fatou Lisa's family compound to be met by Alaghie and his sisters as well as his parents. We had cooked a marvellous lunch of chicken benachin and also chicken domada. The benachin was really superb and we had a great time chatting and laughing with the family. When we had seen them last February Alaghie had quietly asked whether we could bring him a football. Like most 11-year olds he was mad about football and a Chelsea supporter. He has a wide knowledge about the Premier League teams and their top players and would like to be a professional footballer when he grows up. If that isn’t possible then, at the moment, he would like to be a bank manager! His favourite subjects at school are Maths and English. We had taken him a football and he was delighted with it. He was playing in the local competition semi-finals later that afternoon and was confident they would win. 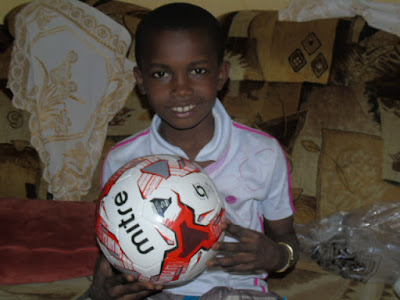 We got back to the hotel at 4.30 in time for a swim and lie in the sun before meeting Linda at Luigi’s for dinner.

On Monday Kathy stayed at the hotel for a bit of a rest (she has to go back to work on Wednesday) so Pippa and I went out. We went back to Kotu Kala school and were pleased to see that most of the electrical safety work has been done. All that needs to be done is to make the box in which the equipment sits watertight. A simple job 5 minute job with a tube of flexible sealant to fill up the hole where the cable goes. Ebrima, the school's administrator has the other job of making the water tower safe in hand. It is quite a big job as the tank has to be drained and removed from the tower. He is planning to have it done at the end of February.

Pippa and I spent the rest of the day going round schools and compounds paying sponsorship monies and taking photos of those students and of some who are seeking sponsors.

As Dave has posted, Kathy and I are now back in the UK after an uneventful flight back. I have enjoyed writing this blog and I hope that you have enjoyed reading it.

I hope to see as many as possible of you at the PAGEANT AGM on Sunday March 4th.