We went to Mama’s last night for dinner. The fish buffet was excellent with a wide variety of fish and shellfish along with salads, rice and rosti potatoes. The centrepiece was a whole ladyfish. The ladyfish is probably the best known and loved fish in The Gambia, but like most largish fish is rarely seen cooked whole, so for food lovers here is a picture of the one we had last night. 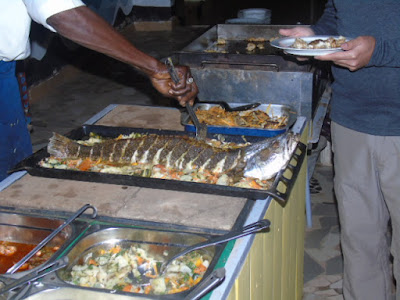 On Saturday morning our first port of call was Royal Albert Market in Banjul. Pippa, Kathy and I went to a stall that sold traditional Gambian cooking pots and pans. We were looking for a wedding gift for Yankuba and Fatou. Yankuba is of course one of our Pageant agents and as a student was sponsored by Pippa and Ian. Fatou was our sponsored student and was one of the first to be sponsored under the Pageant scheme. We bought them two cooking pots and a pan and at the same time bought some more from money donated to Pageant under the ethical gifts scheme. We will give these to families much in need of them. While we were doing that, Wandifa and Abdoulie went off to buy some mosquito nets and buckets, again from money donated under the ethical gifts scheme.

We then visited a number of compounds in Banjul to see students and their families and give out sponsorship money. We had already received most of the student letters to sponsors and also many school reports the day before as Wandifa and Abdoulie had collected them early for us to look over. While parked outside one compound a large flock of vultures arrived on a neighbouring rooftop and we thought you might like to see a photo of some. 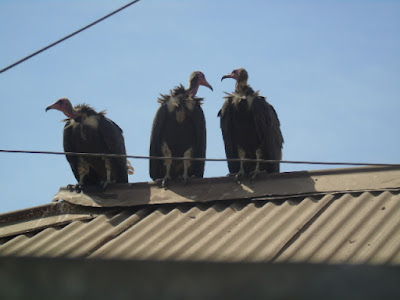 We had a brief visit from Modou Jeng, a sponsored medical student who is now nearing the end of his studies. He is very excited at becoming a doctor in the Gambia.

Heading out of Banjul we stopped to buy some “ethical gifts” watering cans and then visited a few more compounds to see students and pay out more sponsorship money.

On the way back to the hotel in the late afternoon we passed a shop selling small chairs suitable for nursery or lower basic school children. We had tried to buy some of these in November but the deal had fallen through when the shop holder unexpectedly put the price up after agreeing a sum. Wandifa negotiated a good price for 40 chairs of good quality which will be sent to Yundum Barracks School.

Tonight is a quiet night at the hotel before hopefully visiting our sponsored students and friends tomorrow.