We had decided to go upcountry to visit schools and compounds around Soma, and also to visit Wandifa’s sister Wontu. Soma is about 2.5 hours’ drive with good traffic and for the most part is a good road. We made good time despite many stops at police check points and arrived in Soma just before 9.00am where we bought breakfast of freshly cooked omelettes in baguettes (Tapa Lapa)
Our first visit was to Misera basic cycle school, which is a literal stone’s throw from the Senegal border, where we met the principal Mr Modu Faye. In November we had agreed a project to render the perimeter wall which Pageant had funded in 2017. The rendering of the wall is almost complete and the builders have done a first class job. When it has been finished the wall will be decorated with educational art by a teacher.

We were pleased to tell Mr Faye that we had agreed tp the project to build a technical workshop on the school site. It will be used by the school for woodwork, metalwork and home science, and will be available for use by the local community outside school hours. As soon as decorating the school wall has finished we will give him some of the money to start that project.

We were also shown the school garden which was being worked by students at the time. We were able to see lettuces, cabbage, onions, tomatoes, aubergine, okra and sorrel growing. Most of these will be used in the school kitchens but any spare will be given to the students to take home. The garden was looking good but regular and frequent watering is essential. The school has pumped water from the village borehole to a nearby tap but the supply is sporadic. At the time we were there was no water to the tap so students were carrying water in the traditional way for almost 1 kilometre – see photos below. 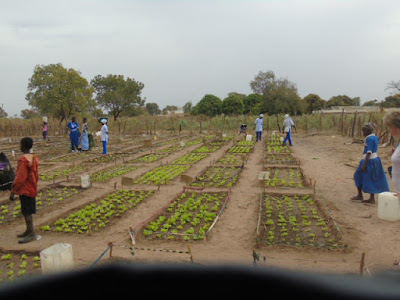 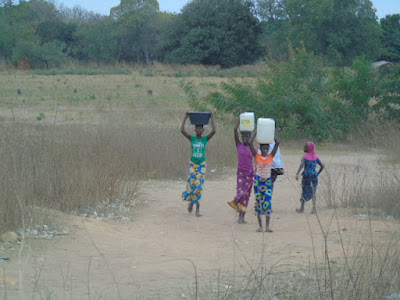 We went to Soma health centre to give some small hats suitable for premature and newborn babies which had been handknitted by a pageant member. We were fortunate enough to be allowed to visit the postnatal ward and personally give a couple of hats to newborn babies.

We then took a short drive to Pakalinding first to visit a student’s family to pay sponsorship, then to the upper basic school there. When we were last over in November the school grounds were very scruffy with lots of litter. We had suggested it would give students a sense of pride in their school if it could be tidied up. Clearly the advice had been taken and we were pleased to see how much better the school grounds looked.

We looked at the refurbished staff room which was a pageant project. The contractors had done an excellent job, with a very good suspended ceiling and floor tiling. It is now well fitted out with tables and chairs brought over in the pageant container load last autumn. 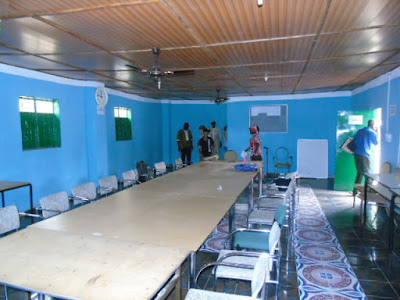 The school has a new project it would like us to consider funding. It has a solid boundary wall going ¾ of the perimeter but the fourth side is just a wire fence in a bad state of repair that is broken in parts and leads straight onto a road. This meant that animals were able to get into the school grounds and cause damage. The school would like to build the fourth wall, which would be about 100metres long. They gave us an estimate for the work which we will consider when back in the UK.

On then to Mariama’s (Wandifa's wife) family compound in Sankuya. We were delighted to be able to give ethical gifts to the very poor community there, including buckets and watering cans for the gardens and a good number of mosquito nets. The community were overjoyed. 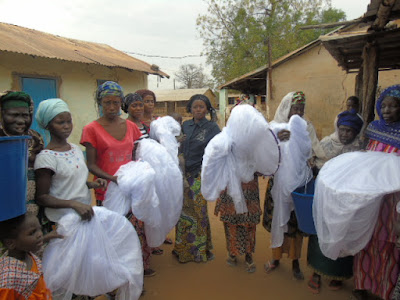 Our final visit of the day was to Kani Kunda to see Wontu and the compound. There are a number of sponsored students living there and we gave them their sponsored money. Two newly sponsored students were given their welcome pencil cases. We were surprised and delighted to be given lunch which was a Benechin with small fish cakes and dessert of fried doughnut-like pastries.

We then started the long journey back to the hotel with a brief comfort stop and a cold drink at Tendeba, a bird sanctuary right on the river. We arrived safely back at the hotel at 7.30pm.