Friday and Saturday were spent carrying out the workshops we had planned for with Gambia College.

On each day we arrived promptly at the university in Brikama shortly before 8.00am. We had prepared the lab the day before so it was just necessary to unpack our stuff, lay out samples and be ready

Each workshop was given mostly to  student teachers  but we had a few lecturers from the college there too. Some of the students had already had some teaching experience; others had not. The workshops were given to 20 people each day. We had taken with us 20 small stereo microscopes and 10 larger transmitted light microscopes, with some kits boxes containing useful tools for preparing samples to look at and simple lenses and jewellers’ loupes.

At the end of the workshops the 10 student teachers whom we judged to be the best overall would receive a kit containing a stereo microscope and tools to take with them to their first teaching post.
The first session on each day explained what equipment they had and how to us it. The teachers were shown how to use a simple magnifying lens, a jeweller’s loupe (which was theirs to keep) and how to use the microscopes, including how to work out the area you can see, using simple measurements on graph paper.

We then stopped for breakfast which consisted of a sausage, onion and salad baguette or cold fried egg baguette and tea or coffee plus water.

After breakfast (at about 11.15) the teachers had about two hours to choose and look at samples. We had taken a number of samples with us including cheap and expensive tea in teabags, different types of fabric, flowers and leaves, insects, potatoes, onion and parsley and small electronic parts. The students were especially interested in the tea where they could see the cheap tea contained mostly stalks and the expensive tea was mostly large pieces of dried leaves. We found some brackish water in a puddle. The students were amazed to find that under the microscope they could see small mini-beasts darting around that were not visible to the naked eye. 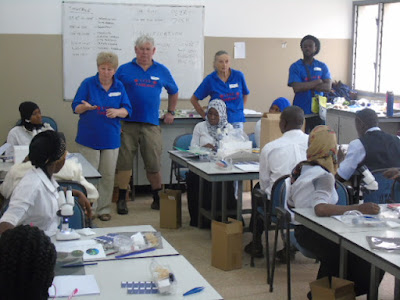 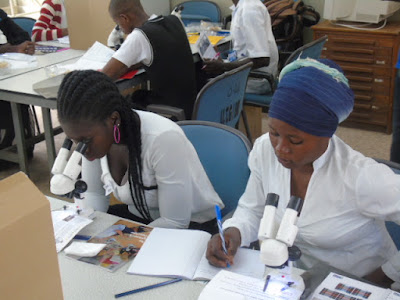 Towards the end of the session the teachers were put into groups of 4 and asked to prepare a lesson for students from local schools and the college who were due to come after lunch.

After lesson preparation we stopped for lunch and prayers. On the first day lunch was fish benachin. This consists of savoury rice, baked fish and vegetables including cabbage, carrots and cassava and a tamarind sauce. On the second day we had chicken yassa which is plain boiled rice, spiced roasted chicken and a thick sauce containing roasted onions. On each day bottled water was provided.

The afternoon sessions went well, with all teachers coping well with the students. We had about 30 students each day, We could see much animated teaching with the students clearly engaged with using the equipment, which is the aim of the workshop. 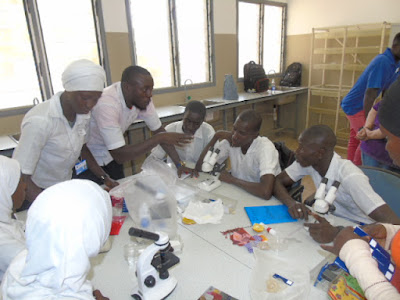 After carefully packing up we returned to the hotel and now have the difficult decision as to which 10 teachers will receive microscopes and kits. We would love to be able to give them all a set.